Cary Funk is director of science and society research at Pew Research Center, where she leads the Center’s efforts to understand the implications of science for society. The Center studies the social, ethical and policy implications of scientific developments in areas such as climate and energy, emerging issues in genetic engineering, and food and space science. She has authored or co-authored a number of reports focused on public trust in science, scientific experts and science news and information. Funk has broad expertise in public opinion research and has specialized in public understanding of science issues for nearly two decades. Prior to joining Pew Research Center, she directed the Virginia Commonwealth University Life Sciences Surveys, national surveys on science and biotechnology. Funk began her career at CBS News in New York working on preelection polling and analysis of exit polls. She earned a doctorate and a master’s in social psychology from the University of California, Los Angeles. 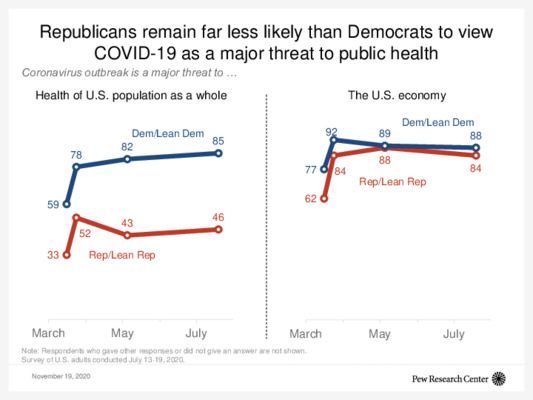 Pew Research Center: Presentation from the OECD Forum Virtual Event "Communicating on public health and vaccines in a climate of mis/disinformation"

Cary Funk
Understanding the Factors Shaping Americans’ Intent to Get a Coronavirus Vaccine
Tackling COVID-19 Trust Health Vaccines
Trust, Communicating on public health and vaccines in a climate of mis/disinformation

Understanding the Factors Shaping Americans’ Intent to Get a Coronavirus Vaccine