We usually speak of “the energy transition” or “the transition to a low-carbon economy.” But this expression comes short of the actual phenomenon. In fact, we are in the midst of an industrial revolution that is completely shaking up the energy industry and is bound to disrupt others as well, such as transportation.

A broad consensus on climate change and technological progress

The Paris Climate Agreement was the culmination of a shift in mindset on environmental and climate issues. Governments of 195 countries officially endorsed policies and ideas that had once been defended mainly by scientists, agreeing to combat climate change and to set out country-specific plans to curb carbon emissions.

Growing public awareness of these issues had another effect: investors not wanting to be sidelined have begun shifting their investments from carbon-intensive to low-carbon energy sources. Major investment banks such as JPMorgan, Bank of America, Citigroup, and Morgan Stanley have publicly pledged to stop or scale back support for coal projects, and bolster financial backing for renewable energies instead.

The support of public authorities and investors led to the rapid maturing of renewable technologies. In 2008, solar power was delivered at approximately €700 per megawatt-hour (MWh). In August 2016, Chile announced a new record-low contract price to provide solar power for less than €30/MWh. In April 2017, ENGIE was awarded a solar project in India with an offer at a record price for that country of approximately €40/MWh.

"We are past the point where a single player, however important, can stop the revolution".

Because of these two complementary developments, broad consensus on climate change and technological progress, the revolution is irreversible, although it may have seemed compromised recently when key political figures publicly questioned the need to combat climate change. Indeed, political uncertainties may slow the transition to a low-carbon economy in certain parts of the world. Nonetheless, we are past the point where a single player, however important, can stop the revolution.

Its energy industry component will have three main characteristics: decarbonisation, decentralisation and digitalisation.

First, decarbonisation: the share of renewable technologies in the total energy mix will continue to grow. Developing and emerging nations will drive the change relying on renewable energy sources to satisfy their energy needs. The Chinese National Energy Administration announced its plans to plough €335 billion into renewable power generation by 2020. In December 2016, the government of India predicted that by 2027 the country’s installed capacity of renewable energies would represent 43% of total installed capacity, up from 14% in 2016.

The share of renewables is also bound to grow in industrialised nations, which already have solid energy infrastructures. A new law in France, the Energy Transition for Green Growth Act, set a target for 2030 of 32% renewable energy for total energy consumption, up from 14% in 2014.

Next, decentralisation: decentralised generation is in many ways the opposite of the traditional model where one large plant provides energy for an entire region. Instead, energy is generated through small production units. There are a variety of decentralised systems. They can go from own-consumption systems composed of rooftop solar panels, to town or district scale electrical distribution networks capable of operating autonomously from the main electrical grid.

Decentralised power generation is in tune with the consumer’s desire to be more engaged when using and consuming goods. Decentralised electricity also presents an incredible opportunity to provide energy access to the 1.2 billion people who still lack it. Such arrangements are an economically viable alternative to the costly investment required for grid extension. In some countries, they are part of public authorities’ strategy for expanding energy access. For instance, Rwanda expects to provide energy access for as much as 20% of its population with off-grid solar systems by 2018.

Finally digitalisation: big data, smart metering, internet of things, blockchain, and so on: all of these innovations will support more efficient energy use and production. They are also critical to the development of own-consumption systems. To manage energy in a building, for example, it is necessary to collect data and to use software that ensures a balance between production and consumption every second, as well as to manage the power grid interface.

We have every reason to be optimistic about the transition to a low-carbon economy. This tectonic change is already underway, driven by the demands of public opinion and technological innovation. Furthermore, it is fundamentally a positive revolution since it will enable us to meet the challenges of both climate change and energy access. Whatever the obstacles, companies such as ENGIE, committed to making the energy transition happen, can be proud of the role they play in the progress of society.

Isabelle Kocher is the CEO of ENGIE Group, a global energy player and an expert operator in electricity, natural gas and energy solutions. ENGIE operates in more than 70 countries, employs about 155,000 people and achieved revenues of €69.9 billion in 2015. Isabelle Kocher joined the Suez Company in 2002 (then GDF-Suez, now ENGIE) and held various key leadership positions within the Group. Most recently, she served as joint Deputy CEO and Chief Operating Officer and CFO of ENGIE. She is also Chairperson of Terrawatt Initiative (TWI), a global non-profit organisation which aims at scaling up solar capacity in the world. She is a Board member of SUEZ and AXA. Isabelle Kocher is the first Frenchwoman to lead a company in Paris’s CAC 40 stock market index. In 2016, she ranked #3 in Fortune’s international Most Powerful Women list.

Engie is a sponsor of OECD Forum 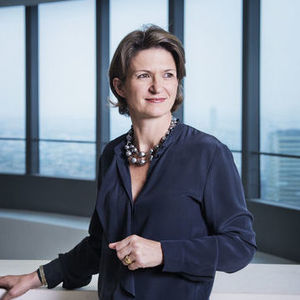