The climate crisis has been declared “the single biggest health threat facing humanity”. The OECD Forum Event Climate and Health, discussed what it is, why we should care and how governments can respond. Banner image: LiveIllustration.co.uk
Anthony Gooch
Director, OECD Forum, OECD
Follow
Like Liked by Etelberto Costa and 3 others
0

This article, first published in April 2022, is part of a series in which OECD experts and thought leaders—from around the world and all parts of society—address the COVID-19 crisis, discussing and developing solutions now and for the future.

In the course of 2021, several conversations and contributions on the Forum Network revealed to what degree the impact of climate change on our health is an issue of ever growing concern. The COVID-19 pandemic highlighted how the impact of human activities on our environment can usher in severe health outcomes, whilst a rising tide of extreme weather events led so many of us to experience directly what a warmer world will increasingly entail.

As a consequence, we have decided to set out on a journey together to foster a better understanding of the climate change and health nexus, and, in so doing, help catalyse action. The first Forum Virtual Event of 2022, Climate and Health, organised in February, represented a meaningful first step in this process. With recovery plans adopted by governments across the world in response to the pandemic still insufficiently aligned with ambitious climate goals, it is all the more critical and necessary to emphasise how climate action stands to benefit not only the planet, but also our own health.

At the start of our February session, when I asked participants to indicate whether they sufficiently understand the health impact of climate change, a significant 66% admitted they did not! As our audience included representatives dealing with these issues in government, parliament, international organisations, business, non-governmental organisations and trade unions, there remains considerable work to do to bridge this gap in knowledge and understanding to help drive appropriate policy action.

Andy Haines, Professor of Environmental Change and Public Health at the London School of Hygiene and Tropical Medicine—who was a lead author on health for the IPPC and chair of the Lancet Pathfinder Initiative on health in the zero-carbon economy—provided a timely reminder of the extent of the health impact of climate change, ranging from heart and lung disease, cancer, diabetes and even Alzheimer’s to heat and humidity-related health impacts.

The effects of climate change further exacerbate existing social and economic inequalities including poor air, food and housing quality, disproportionately harming the health of disadvantaged populations in both developed, and middle- and low-income countries. Young children, pregnant women, older adults, people with chronic illnesses and disabilities and those with fewer resources in general all face a higher level of risk.

Many of the issues to be addressed are complex. These include an over-reliance on GDP as a measure of economic well-being whose effects are more immediate and salient, but excessively discount longer-term negative externalities such as future health and environmental harms. Others, such as taking a more climate-conscious approach to designing cities, offices and housing, promoting public transport and clean sources of energy, and changing our dietary habits, are more practical.

But how exactly will reducing greenhouse gas emissions and pollution help us reduce the risks of negative health outcomes that are neither widely appreciated nor factored into climate thinking? According to Andy Haines, “we already know enough about the range of effects of climate change on health to be alarmed and to be advocating very ambitious and decisive action”—even if there remains much work to do to fill gaps in knowledge. We know the consequences of extreme heat exposure and its impact on both labour productivity and death rates among the elderly and other vulnerable populations. We know the effects of climate change and air pollution on foetuses and newborn babies. We know the increased risk of wildfires and the spread of water-related and infectious diseases. We also understand a good deal about the direct health consequences of human activities that lead to the release of chemicals and noxious gases such as nitrogen dioxide into the atmosphere, the effects of which are exacerbated by warmer temperatures caused by GHGs.

As bad as the storms are outside, the storms inside us are going to be even worse. That is not a thinking place. People become angry and polarised.

Physical health is not the only casualty of climate change. An increase in anxiety and depression is an inevitable consequence of the feeling of powerlessness in the face of existential risks, according to Lise van Susteren, Co-founder of the Climate Psychiatry Alliance and an Advisory Board Member at Harvard’s Center for Health and Global Environment. “As bad as the storms are outside, the storms inside us are going to be even worse.” Under mental duress pressure is exerted on our brain, which impairs our decision-making capacity. The result is that “people become angry and polarised”.

Other challenges and uncertainties, including poverty and social inequity, can combine with climate angst to aggravate outcomes further. The feeling of helplessness in the face of imminent and irreversible loss is a "pre-traumatic stress condition", according to van Susteren. However, a positive outcome of the COVID-19 experience is to psychologically prime us for a more robust mental response in anticipation of the future challenges posed by climate change. Having lived through a period of intense anxiety—compounded by recent geopolitical uncertainties—we may now be mentally better prepared for future risks than we were before 2020.

To address the health impacts of climate change, we need a systems-approach, with intersectoral thinking and action.

Yet the world’s food system— the full chain from the supply and production of crops, livestock, fish and other agricultural commodities to their transport, processing, wholesale, retail and preparation, and their final consumption and disposal—must today feed almost eight billion people. It was already under pressure without the variable of climate. With the world’s population expected to grow by 30%, greater demand for meat will mean a 100%-growth in demand for agricultural products by 2050. Climate change will only add to the pressure through decreasing yields caused by extreme weather and desertification. And recent geopolitical developments with serious impacts on commodities are set to pile on the pressure further.

“You could say we have a perfect storm here”, said Claus Felby, Senior Vice President for Biotech at Novo Nordisk Foundation. “It is likely that the nutrient content of diet will deteriorate, especially for vulnerable groups. We need a deeper understanding of biology to create practical solutions. We also need to address the fact that we waste 30% of food produced”.

What seems clear is that continuing with business as usual is not an option. The entire food system, whether agricultural production, supply lines or diets will all have to undergo a radical transformation in order to realise efforts to create food security and sustainability. The good news, according to Felby, is that there are already major efforts to overhaul the system focused on reducing greenhouse gas emissions from food production, which make up around one-third of the total. There are also often simple solutions, such as having better storage containers, which in Africa can address problems associated with high post-harvest losses. As our understanding of biology improves, so will our ability to take measures that boost soil quality and food production, and reduce greenhouse gas emissions.

It is, argues Felby, an international effort that requires in-depth understanding and co-ordination between multiple stakeholders—one in which international organisations like the OECD can play a critical role to systematically tailor policies aimed at addressing the pandemic, the recovery and the transition to the net-zero economy.

The participants in our Forum Virtual Event were also polled on who they expected the most from in terms of finding solutions. Though they have high expectations (60%) of their governments and legislators, they also want to be able to do more themselves (24%).

There is perhaps no bigger challenge for governments than tackling multiple policy challenges at once. This requires a holistic view of the problems and a system-wide approach to effective policy prescription. The twin topics of health and climate change are a good example of the complexities of interlinked public policy problems. But the more problems governments try to tackle, the greater the risk that they fail to do so. To be successful increasingly requires a major shift in methodological approach in order to avoid the heightened risk of getting bogged down into departmental siloes and policy black holes.

“To address the health impacts of climate change, we need a systems-approach, with intersectoral thinking and action”, said Haines. “Ministers of transport, agriculture and energy should, for example, all be thinking and acting as health ministers”.

However, it is not only a question of optimising processes governing overlaps between different government departments, but also of combining different philosophical approaches. For example, climate change adaptation looks at the problem through the lens of disaster relief, and climate change mitigation looks at the same problem through the lens of agriculture and greenhouse gas reduction. Both approaches are required but only a systems approach can ensure they can be combined effectively.

According to Haines, specific policy interventions should be guided by three principles: "move away from fossil fuels, move towards more sustainable diets and invest in better public transport." A wholesale shift to more sustainable energy on its own would have a meaningful impact on what the WHO estimates are seven million deaths a year from air pollution; less red meat and more fruits and vegetables would support health, biodiversity and climate; and improving public transport systems would help to reduce air pollution and increase human physical activity.

But are policy principles on their own enough? As Lise van Susteren explained, we have to better understand mindsets and culture change; we have to think more about the psychology of leadership—about role models and herd mentality, and getting leaders, thought leaders, and ourselves to change our behaviours. How do we create cultural tipping points?

We all need to be empowered to make the right everyday choices that protect both our health and the climate. As Professor Kotcher of the Center for Climate Change Communication at George Mason University, explained in a recent contribution for the OECD Forum Network, a growing body of evidence suggests that effectively communicating about the health harms of climate change—and the solutions to address them—can play a critical role in helping generate public demand for climate action.

We hope the session was a first step in providing a background so that policy-makers, and also all of us as individuals, feel empowered to take the action that is needed. The final audience poll seemed to indicate this!

OECD Forum Virtual Event: Women at the Frontline of the Recovery 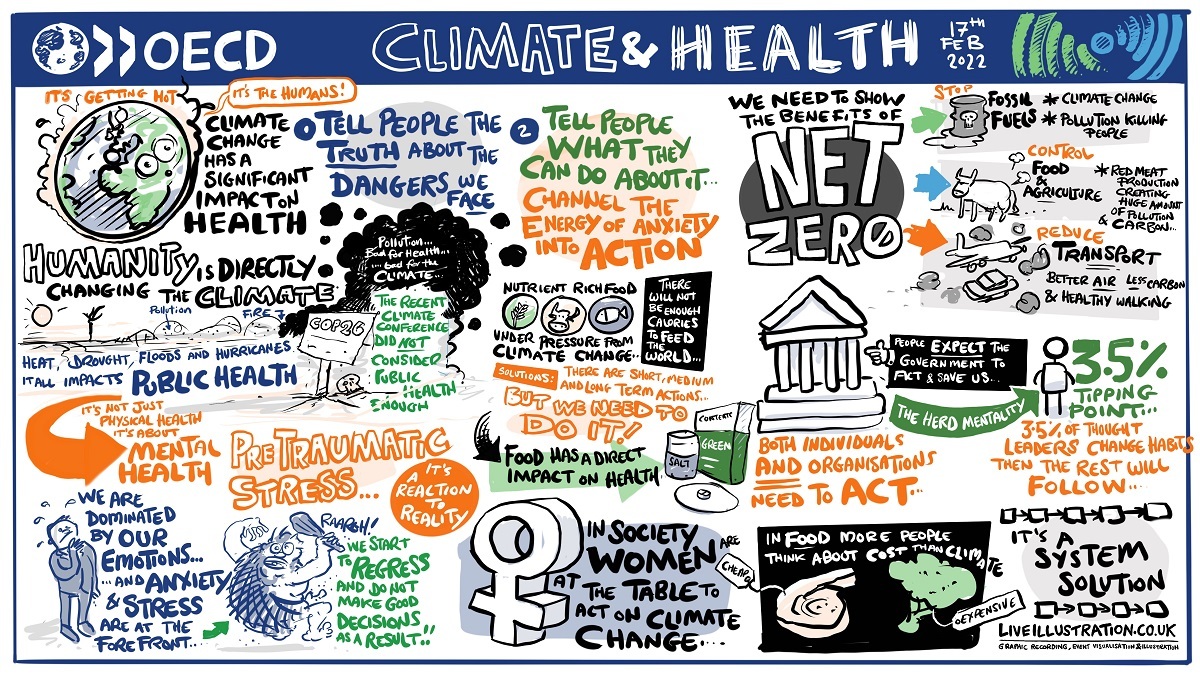 The climate crisis has been declared “the single biggest health threat facing humanity” in a letter signed by organisations representing 47 million global health professions. The OECD Forum Event Climate and Health, which took place in February 2022, discussed what it is, why we should care and how governments can respond.