Waterborne transport is critical to the global economy, and the historic 2022 droughts exposed how vulnerable inland shipping can be to water shortage. This raises concerns over a climate impact that so far seems to have been underestimated: supply chain disruption.
Mark van Koningsveld
Professor, Ports and Waterways, Delft University of Technology
Follow
Like Liked by Esra ERUYSAL UYGUR
0

The OECD Forum Network is a space for experts and thought leaders—from around the world and all parts of society— to discuss and develop solutions now and for the future. Aiming to foster the fruitful exchange of expertise and perspectives across fields, opinions expressed do not necessarily represent the views of the OECD.

According to the United Nations Conference on Trade and Development’s Review of Maritime Transport, the weight of the total transported cargo has nearly tripled since 1980. In this same period, container transport volumes exploded from 0.1 billion tons in 1980 to 1.85 billion tons nowadays. Associated with this spectacular growth are equally spectacular capital investments: new ports and terminals (land reclamations and port infrastructure, see Figure 1), more and larger vessels (development of mega ships), substantially upgraded infrastructure (e.g. Suez canal expansion, New Panama locks), etc. All this has resulted in an intricate system of global transport connections and their supporting infrastructure, which forms the foundation of our globalised economy.

The massive investments to create production facilities near key resources (labour, raw materials, machines), logistical networks to connect global supply and demand, ever increasing vessels sizes to achieve unprecedented economies of scale—together with the supporting port and waterway infrastructure—coincide with a massive increase in the world’s GDP: from USD 11.33 trillion in 1980 to more than USD 96.1 trillion in 2021. Unfortunately, our continued drive for industrialisation also coincides with a disheartening increase in Green House Gas (GHG) emissions. Total global CO2 emissions have roughly doubled since the 1980’s, reinforcing a trend that began at the start of the industrial revolution around the 1850s.

In its 6th assessment report (AR6) the Intergovernmental Panel on Climate Change (IPCC) concludes that “human influence on the climate system is now an established fact” (Technical summary, p. 41). The IPCC’s estimates for future Global Mean Sea Level (GMSL; see AR6, Box TS.4, Figure 1) get a lot of attention. But we should be equally concerned about its conclusion: “[We can say] with high confidence that human-caused climate change has driven detectable changes in the global water cycle since the mid-20th century” (p. 42). The IPCC further projects, again with high confidence, that the variability of the water cycle in most regions of the world will increase “under all emissions scenarios” (p. 42). This variability can manifest itself, among others, through extreme precipitation and drought.

The IPCC reports have placed substantial attention on climate change mitigation. The International Maritime Organisation, for example, launched its initial GHG emission reduction strategy (2018) to reduce the effects of shipping on the climate (viz. “total annual GHG emissions from international shipping should be reduced by at least 50% by 2050 compared to 2008”). This initial strategy was expanded in 2021 with short-term Similar policies have emerged around the world: the European Green Deal of 2019, for example, aims to ensure that the continent is GHG emission-free by 2050; and 2021’s Fit for 55 package proposes to make the EU’s climate, energy, transport and taxation policies ﬁt for reducing net GHG emissions by at least 55% by 2030. It is striking, however, how little attention there seems to be for the effect of the climate on shipping. Given the sheer volumes of international trade and the complexity of the global transport system, this is a climate impact that we cannot ignore.

Larger vessels bring economies of scale, but they can also cause great disruption. On 23 March, 2021 the world held its breath as the mega containership MSC Ever Given ran aground in the Suez canal, blocking all passage for a period of six days. Global supply chains were disrupted for months as a consequence. While this incident was not linked to climate change, it illustrates the potential disruption that the blockage of a crucial transport route can cause. Climate related droughts, such as the 2018, 2019 and 2022 droughts in Europe, created similar but much longer lasting disruptions as rivers dried up for months, affecting the transport corridors of which they are a part.

At first, when droughts occur and water levels drop, inland ships can adapt by reducing their loads. As a result, however, more trips are needed to transport the same amount of cargo. More trips lead to higher cost, increased fleet occupancy, increased traffic intensity and potential for congestion. When the droughts intensify, loads need to be reduced to a point where more trips no longer compensate the cargo loss. As a result the total transport capacity of waterways is reduced and transport costs escalate. When the droughts prolong and intensify to extremes, inland ports can become fully isolated when ships have a hard time passing depth bottlenecks or find it no longer possible to do so safely. In the 2022 drought, this phenomenon led to supply and production disruptions for the German chemical cluster in Ludwigshafen just upstream of the known depth bottleneck in Kaub.

The recent Costs due to climate change impacts in Germany project—commissioned by the Federal Ministry of Economics and Climate Action and the Federal Ministry for the Environment, Nature Conservation, Nuclear Safety and Consumer Protection—aimed to provide insight into the “overall picture of the economic climate change-related losses and adjustment costs”. The research estimated that tangible losses from extreme weather events had amounted to at least EUR 80 billion since 2018, with costs roughly equally attributable to summer heatwaves and droughts (2018 and 2019) and floods (2021). The study notes that much of the damage “cannot be recorded on a monetary basis”, so the total loss amount could be in fact significantly higher. Similar impacts were reported in 2022 throughout Europe and in the United States, China, South America etc., illustrating the global nature of the problem and underlining the urgency.

It is interesting to see that when water gets scarce, the debate about its effective use intensifies. Of course, it affects shipping as outlined above. But water scarcity will also affect energy production (through disrupted supply lines of gas and coal, depleted water basins for hydroelectricity and discharge limitations due to high water temperatures) and drinking water supply. Agriculture, fruit production and horticulture also require substantial amounts of water, as do various industries for process or cooling water. There is a range of other functions like recreation and nature values that also rely on water. Clearly climate change affects not only shipping; rather it affects a range of crucial user functions that compete for the availability of sufficient water of sufficient quality. The 2014 OECD report on Water Governance in the Netherlands reports on the “sequence of priorities” (in Dutch, verdringingsreeks) that is used in the Netherlands to determine the allocation of freshwater to specific categories of users during times of shortage.

While it is important that such a sequence of priorities exists, it is also clear that this regulates the problem rather than resolves it. When the climate change that IPCC predicts actually materialises—if it has not already—we need to be prepared for a world where we first guide water out of our systems as quickly as possible when there is an abundance (an issue that received substantial attention and investments in the form of flood control measures); and second keep it inside our systems as long as possible for when there is shortage (an issue that seems to have received a lot less attention so far). This requires substantial investments in infrastructure, but possibly also in new vessels and new logistic concepts, and it requires time to implement. But most of all this requires collaboration and an integral approach. Each system requires a solution that is tailored to its environmental properties and socio-economic needs. While bold interventions may be required from the perspective of one user function, careful consideration should be given to impact on others; not only under extreme conditions, but also normal ones.

It is clear that a careful approach is paramount. But recent droughts in combination with the IPCC warnings also show that we may not have as much time to prepare as we thought. Compared to the timescales of sea level rise, it seems that the predicted variability in the water cycle is upon us already. We must take action to prepare our water systems for climate change using an integral approach. In this, the far-reaching impacts of supply chain disruptions must not be overlooked!

Mark van Koningsveld
Professor, Ports and Waterways, Delft University of Technology
Follow
Mark van Koningsveld is an innovation expert with a strong passion for water and maritime challenges and a unique background in both research and practice. Throughout his career he always worked on the interface between specialist knowledge and end user needs. First as a researcher at the University of Twente and Deltares (10 yrs), then as lead engineer and program director innovation at marine contractor Van Oord (10 yrs full time, since 2018 part time), and since 2018 as part time professor Ports and Waterways at Delft University of Technology. In 2020 he was appointed as member of the Topteam Water & Maritime representing academia by the Secretary of State of the Dutch Ministry of Economic Affairs and Climate Policy. As a strategic and critical thinker his track record is characterised by out-of-the-box innovations that open up new perspectives for decision makers to achieve their strategic and tactical objectives. Recurring themes are nature based solutions, data driven engineering and integral designs from a systems perspective. He co-authored a number of impactful articles and books and developed various open source software packages that are applied both in practice and in Delft Universities curriculum. For his research, please visit: https://www.tudelft.nl/en/ceg/about-faculty/departments/hydraulic-engineering/sections/rivers-ports-waterways-and-dredging-engineering/staff/prof-dr-ir-m-mark-van-koningsveld 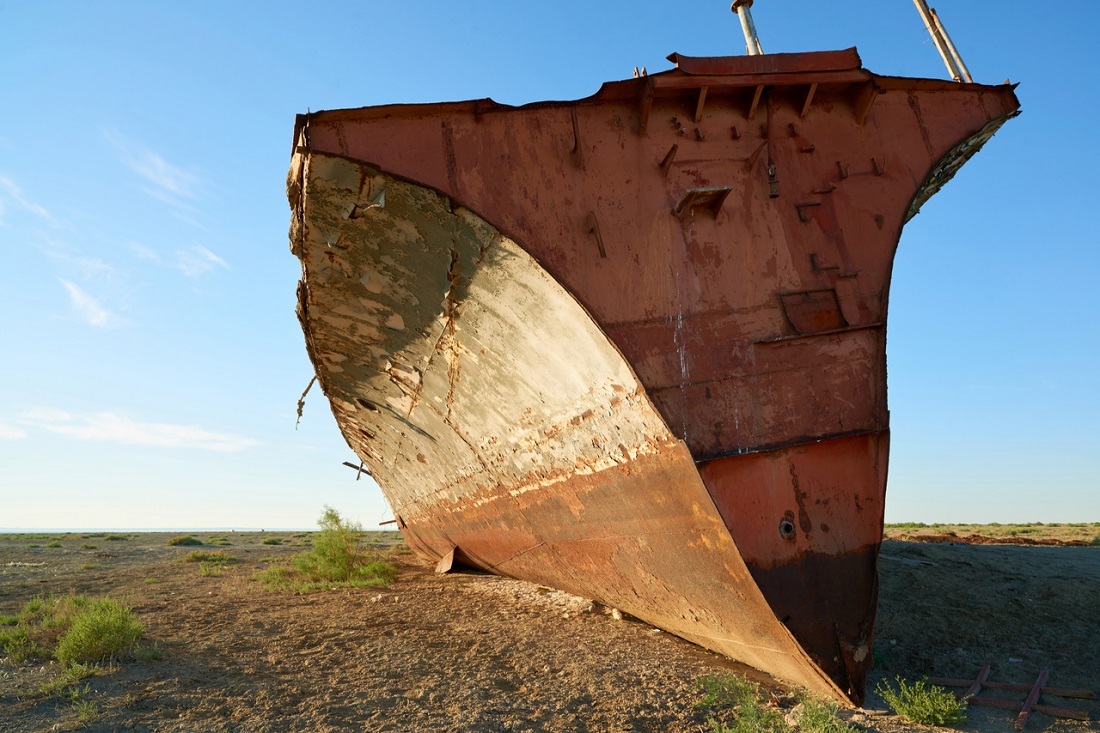 Waterborne transport is critical to the global economy, and the historic 2022 droughts exposed how vulnerable inland shipping can be to water shortage. This raises concerns over a climate impact that so far seems to have been underestimated: supply chain disruption.