Underwater noise pollution needs to be tackled at a global level, and within a global regulatory framework. For humans, noise is a nuisance; for marine wildlife and the ocean systems it is a matter of survival. We owe it to our ocean to seize this opportunity. Banner: Shutterstock/Manamana
Sharon Livermore & Azzedine Downes
Director, Daylight Security Research Lab; Research fellow, Center for Long-Term Cybersecurity, UC Berkeley
Follow
Like Liked by Axel Froissart and 2 others
0

The mighty blue whale—the largest animal to have ever existed on this planet—can live to 80 or 90 years old. Much like a human born in the 1950s, the world a blue whale born now inhabits today is dramatically different. Thankfully since then, humans have stopped hunting blue whales after nearly wiping them out completely. However, other threats have taken hold. One such invisible threat to marine life is underwater noise pollution, which is drowning out the natural sounds of the ocean.

Blue whales could once communicate with each other over entire ocean basins. However, between 1960 and 2000 ocean noise levels have doubled every ten years in many areas. This has drastically reduced animal “communication space”, the distance over which individuals can communicate with one another; for blue whales, this has shrunk by 90%. This means that breeding opportunities and choices are reduced or lost and, for an endangered species, this can have population-level implications.

From the largest animal on the planet to commercially important fisheries species and tiny snapping shrimp and molluscs, the impacts of underwater noise pollution are widespread.

From the largest animal on the planet to commercially important fisheries species and tiny snapping shrimp and molluscs, the impacts of underwater noise pollution are widespread. These range from stress and disturbance to the masking of essential communication, and can lead to behavioural changes that may ultimately lead to population-level effects. The main cause of this pervasive pollutant? Commercial shipping.

Sound travels much further and faster underwater than in air, and is vitally important to marine animals for communication and navigation. But marine life is being constantly exposed to human-produced noise, and species that are particularly noise-sensitive—such as whales and dolphins—are either being forced out of critical habitats or have to tolerate this noise to continue essential activities like feeding and breeding.

The low frequency noise generated by ships plying the global ocean produces a constant background din, which overlaps exactly with the frequency range for hearing and communication in large whales and many other marine animals. However, because noise isn’t visible it means the impacts on different animals are not immediately obvious, and it can also take time for the effects to become evident in individuals or populations.

Both technical and operational solutions exist to reduce underwater noise produced by ships. Well-maintained, clean vessels can help reduce noise but, in fact, the propeller plays a huge role in noise reduction: around 85% of underwater noise from shipping is caused by the formation and rapid collapse of bubbles from the rotating propeller (known as cavitation). So quiet propellers need to be factored in when designing and building new ships, but hull shape should also be considered. Existing ships can also be retrofitted to decrease underwater noise and its harmful impacts. However, noise-reducing designs are costly and there is currently very little regulatory support for widespread uptake. So, the most straightforward and readily applicable solution to reduce shipping noise right now is to just slow down.

Reducing commercial ship speeds can not only drastically reduce underwater noise pollution, but also decrease the risk of deadly collisions between ships and whales (known as “ship strikes”). Furthermore, by travelling at reduced speeds ships burn less fuel and so produce fewer harmful greenhouse gases, making slower speeds a win-win for the environment and industry.

Voluntary guidelines for the reduction of underwater noise from shipping exist through the UN agency responsible for the regulation of global shipping, the International Maritime Organization (IMO). But there has been very little action or uptake by either countries or the shipping sector, most likely because the guidance is non-mandatory. Efforts are now underway at the IMO to review the guidelines and develop the next steps necessary to reduce underwater noise from shipping worldwide. This is much needed progress, but action is needed now to protect marine life and our ocean globally.

In a global first, the European Union recently set EU-wide thresholds for underwater noise, with recommendations on maximum acceptable levels for this pollutant. It is now in the hands of Member States to implement appropriate measures, for example by reducing ship-generated noise or setting spatial restrictions for human activities. An obvious initiative that would help with implementation would be the adoption of “Blue Speeds”. This would limit ships to 75% of their maximum design speed—which is approximately a 10% speed reduction—to decrease both underwater noise and the risk of ships colliding with whales in European waters, while also reducing fuel consumption and greenhouse gas emissions from the sector. The International Fund for Animal Welfare is leading an EU-wide campaign to make Blue Speeds a reality, and the new noise thresholds make the EU a perfect starting point. This is a solution that can be implemented immediately and works with existing ships, leading to a permanent, industry-wide change.

For humans, noise is a nuisance. For marine life and the ocean systems they sustain, it is a matter of survival.

Globally co-ordinated action is clearly required to address this threat. Better standards and regulatory support to reduce underwater noise from shipping are desperately needed to reconcile international trade with helping to protect fragile marine ecosystems and their inhabitants. Progress has been slow to date, but tackling this invisible pollutant is critical to help marine species withstand the other pressures and threats to their survival, helping to improve biodiversity and the health of the ocean overall.

Global targets to reduce pollution will also help drive change. Governments meet in Montreal for the 15th Conference of Parties of the Convention on Biological Diversity this month, with the aim of agreeing a new Global Biodiversity Framework to address the crisis we face that threatens the loss of a million species. The current draft Framework contains a target on reducing pollution; it is critical that underwater noise is considered on the list of pollutants covered by this target if we are to inspire the kind of action needed to tackle this pervasive threat to marine life.

Underwater noise pollution is an international, transboundary issue, so it needs to be tackled at the global level. Currently there is no international regulatory framework to control noise, but the good news is unlike other pollutants, such as oil or plastic, there is no clean-up operation required. Once the noise stops, the pollution stops. For humans, noise is a nuisance. For marine life and the ocean systems they sustain, it is a matter of survival. We owe it to our ocean to seize this opportunity.

Working with both developed and developing countries, the OECD aims to ensure that all societies can harness the benefits of the ocean on a sustainable and inclusive basis. Learn more on our dedicated portal!

Sharon Livermore & Azzedine Downes
Director, Daylight Security Research Lab; Research fellow, Center for Long-Term Cybersecurity, UC Berkeley
Follow
Sharon has always had a passion for wildlife and conservation, and began studying marine mammals in 2005. After a number of years working in the field researching these animals, she decided that her energy and enthusiasm for protecting and conserving marine animals and habitats would be better suited to work in the NGO sector. Today, as the Director for the global Marine Conservation team, Sharon supports IFAW's efforts worldwide to protect whales from ship strikes, make our oceans quieter, bring an end to commercial whaling and reduce threats to marine life and habitats around the world. She has represented IFAW at meetings of the International Whaling Commission, the UN Oceans Conference and the International Maritime Organization, engaging with governments, industry and policy makers to ensure our work helps inform decisions made at these international forums. /// As IFAW’s Executive Vice President since 1997, Azzedine Downes had worked closely with experts from across the sciences and decision makers from around the world. But when he became President, IFAW started bringing together what Azzedine likes to call “the unusual suspects.” Seamstresses in Malawi. Auction houses in China. Military intelligence officers in Minnesota. Working together, IFAW’s eclectic network is now helping animals and people thrive together in more than 40 countries. Azzedine has also influenced international policies to create positive change on the ground. Before joining IFAW, Azzedine served as the Chief of Party for the U.S. Agency for International Development in Jerusalem and Morocco, as well as the Acting Regional Director for the United States Peace Corps in Eurasia and the Middle East. In 2015, Fast Company named Azzedine one of the “The Most 100 Creative People in Business,” and he has been listed among The NonProfit Times’ “Power and Influence Top 50.” He is a member of the Global Tiger Forum Advisory Council, and he currently sits on the U.S. Trade and Environmental Policy Advisory Committee. 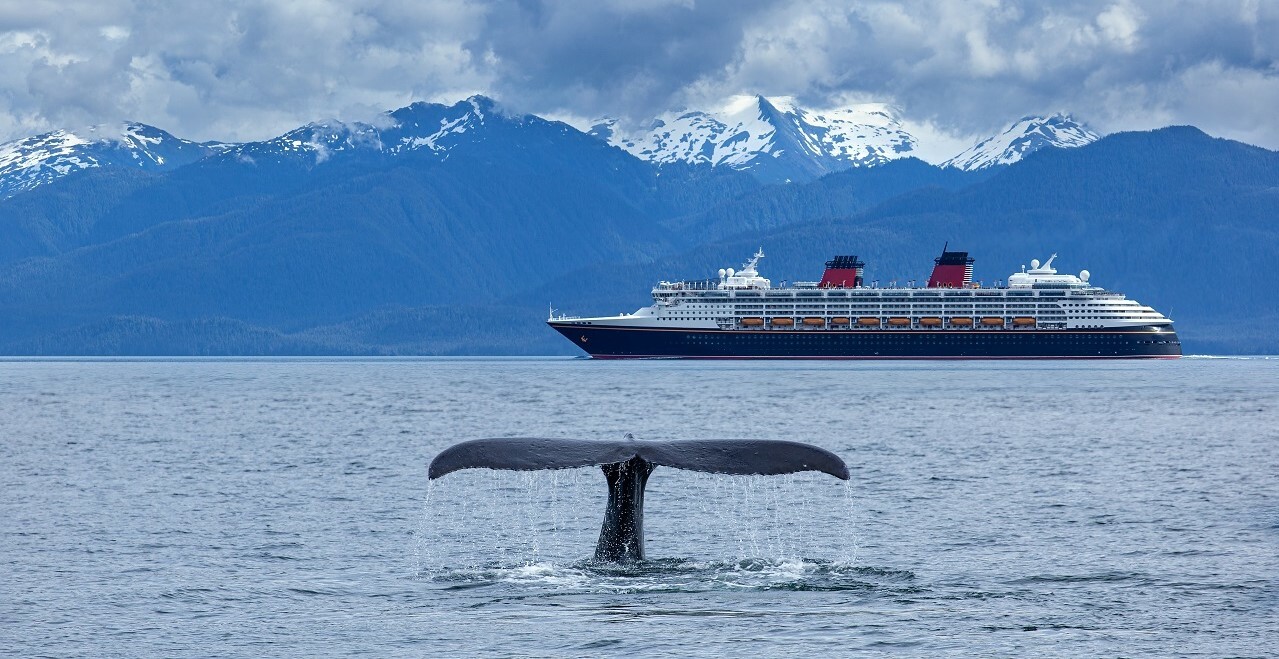 Underwater noise pollution needs to be tackled at a global level, and within a global regulatory framework. For humans, noise is a nuisance; for marine wildlife and the ocean systems it is a matter of survival. We owe it to our ocean to seize this opportunity.