This book aims to address a major gap in an emerging field—namely how environmental changes could affect the health of humanity and what can be done to protect and advance the health of today’s and future generations in the face of such far-reaching changes. Banner image: Cambridge University Press
Andy Haines
Professor of Environmental Change and Public Health, London School of Hygiene and Tropical Medicine
Follow
Like Liked by Selma Karabey and 1 other
1

Adapted from the preface of Planetary Health: Safeguarding Human Health and the Environment in the Anthropocene by Andy Haines & Howard Frumkin. Copyright 2021. Used with permission of the publisher, Cambridge University Press. All rights reserved.

Humanity has emerged from the Holocene Epoch, a period of relative climatic stability lasting about 11,500 years, into the Anthropocene Epoch, so called because it is characterized by the dominance of our own species over the global environment. There is a growing number of books about global environmental changes in general, including transformation of our climate, land use, and oceans, and about the Anthropocene Epoch more specifically. So why add to this, sometimes depressing, litany? This book aims to address a major gap in an emerging field – namely how these environmental changes could affect the health of humanity and what can be done to protect and advance the health of today’s and future generations in the face of such far-reaching changes.

When we think about medicine and health more generally we often focus on the potential for new cures for currently intractable conditions – cancers, neurological conditions, mental illness, and the pervasive problems of an ageing population. The hope is that through advances in molecular genetics, artificial intelligence, and bioengineering, for example, we might overcome chronic disease and disability to lead long and healthy lives unencumbered by today’s afflictions. The biomedical focus of much research can make important contributions to the advancement of health but it also has notable shortcomings, including the growing unaffordability of health care, the large burden of preventable ill health, and dimensions of human well-being beyond simply the absence of disease. Good health remains far too elusive to poor and disenfranchised people the world over. An overly biomedical approach also fails, in large part, to address the unsustainable basis of today’s economy.

This book – whilst acknowledging the importance of biomedicine – also challenges its limited vision, and encompasses a wider view of health based on the integrity of natural systems. This is hardly a new concept. In On Airs, Waters and Places, written 2500 years ago, Hippocrates described the importance of considering environmental factors, including climate, in understanding the disease patterns in different locations.

A few pioneers, notably the late Tony McMichael, had the vision to see how global environmental change could threaten human societies. Tony’s magisterial triad of books published over a quarter century – Planetary Overload: Global Environmental Change and the Health of the Human Species (1993), Human Frontiers, Environments and Disease (2001), and Climate Change and the Health of Nations (published posthumously in 2017), presciently established the foundations of what we now know as Planetary Health. We both worked and published with Tony, and we honour his memory. Scholarship on the health impacts of planetary changes slowly accumulated, despite the failure to attract appreciable funding or attention from much of the health research community for many years; we think Tony would be gratified to know that this approach is now gathering considerable momentum.

In recent years there has been a pronounced shift in interest, particularly from early career researchers and students, in transdisciplinary collaborations to understand how natural systems underpin human health and effective policies to address the interlinked challenges of the Anthropocene Epoch. This book is dedicated both to the early pioneers and to a new generation of informed and open-minded scientists, practitioners, policymakers, and increasingly the wider public from all walks of life. The motivation for writing the book stems in part from our involvement in the Rockefeller Foundation–Lancet Commission on Planetary Health, one of us (AH) as Chair. The Commission’s work involved synthesizing large amounts of evidence from a diverse range of sources. We have updated the evidence where relevant and we hope the synthesis will be useful to a wide readership. We acknowledge with gratitude the contributions of other members of the Commission and the many colleagues with whom we have worked over the years. Their names feature prominently in the reference lists to many of the chapters.

This book aspires to provide a compelling overview of how human activities impact on natural systems, and the implications of the resulting changes for health, well-being, and even survival both today and in the foreseeable future. We do not stop at describing the challenges; we aim also to provide a critical appraisal of policy options to sustain and improve health while rapidly reducing the environmental footprint of humanity […]

In recent years, it has become common to hear global challenges described as ‘existential’ and as emergencies. Neither characterization is hyperbolic. We are indeed at a critical juncture. Human societies must shift to a more sustainable trajectory to safeguard the health of today’s population and of future generations in the Anthropocene Epoch. We hope that this book will contribute, in a small way, to the needed transition.

I am Professor of Environmental Change and Public Health with a joint appointment in the Dept of Public Health, Environments and Society and in the Dept of Population Health. I was previously Director (originally Dean) of LSHTM for nearly 10 years up to October 2010, having previously been Professor of Primary Health Care at UCL between 1987-2000. I worked part-time as a general practitioner in North London for many years. 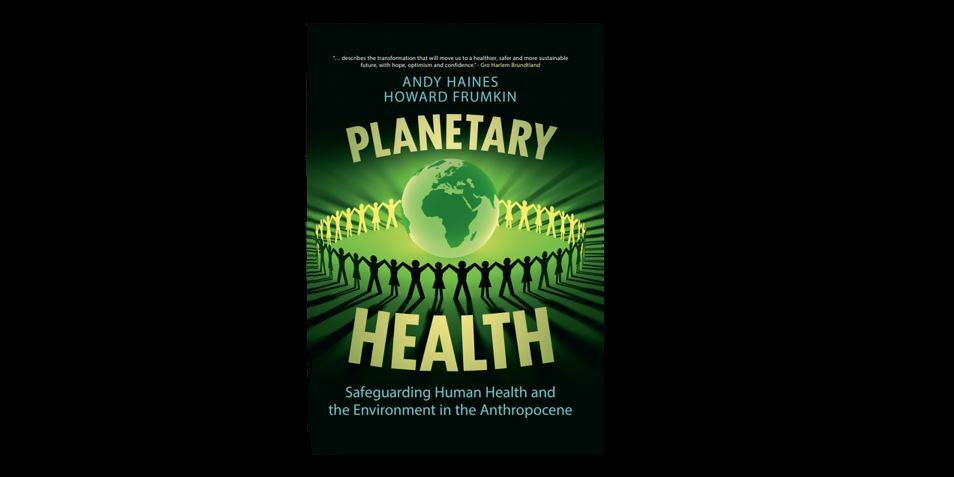 This book aims to address a major gap in an emerging field—namely how environmental changes could affect the health of humanity and what can be done to protect and advance the health of today’s and future generations in the face of such far-reaching changes.