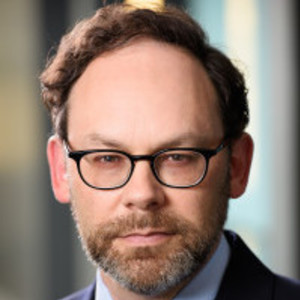 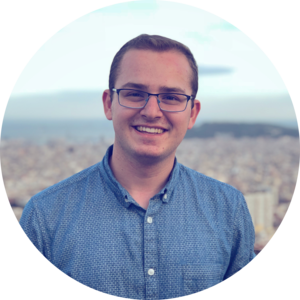 As nations around the world continue to struggle with a global pandemic and its economic consequences, policymakers, business leaders, civil society leaders, and citizens alike are hoping for a better year in 2021. To understand what members of the OECD community think about the major challenges facing their countries and the world as we move into a new year, the OECD and Pew Research Center polled last year’s OECD Forum participants, exploring questions on the coronavirus outbreak, the economy, threats and international co-operation. Forum participants express concerns about the long-term economic future, but they also think the current moment provides an opportunity to “build back better”. And they believe international co-operation is key to solving the world’s most pressing problems. 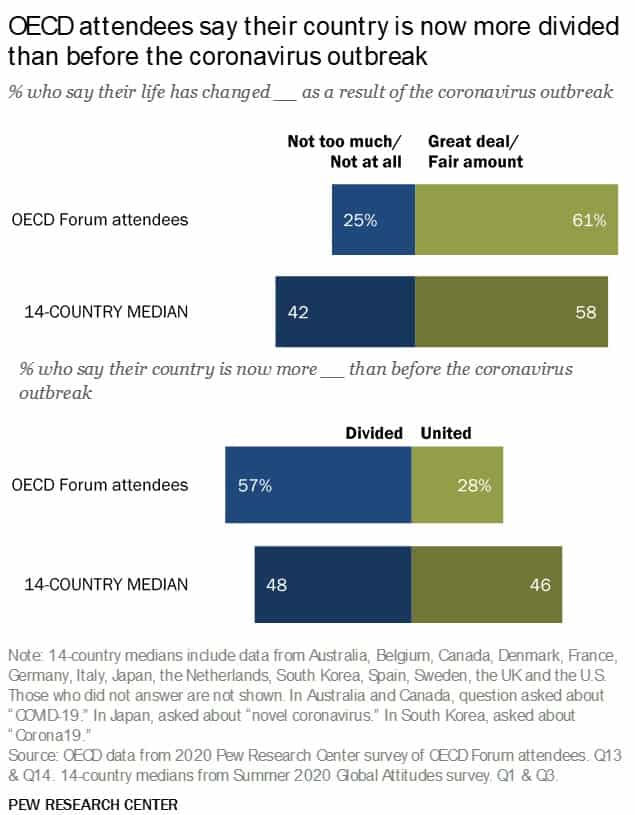 Forum participants largely believe the pandemic has exacerbated divisions in society: 57% say their country is now more divided than before the coronavirus outbreak, while about a quarter (28%) think their country is more united. Ordinary citizens were more evenly split on the question over the summer; across 14 countries surveyed, a median of 48% said their country was more divided, while 46% saw more unity. 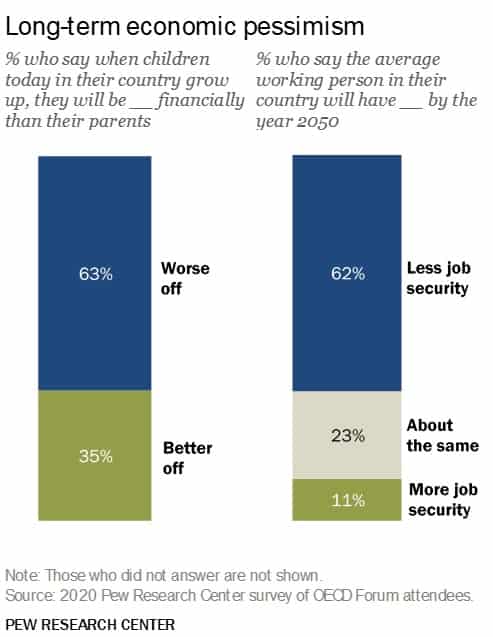 There is considerable pessimism about the long-term economic future. A majority (63%) of Forum attendees believe that when children in their county grow up they will be worse off financially than their parents, and about the same number (62%) say the average working person will have less job security by the year 2050, compared with just 11% who expect more job security.

Participants believe automation will create major economic disruptions in future years: 69% say it will likely make it more difficult for ordinary people to find a job, and the same share believe it will lead to greater economic inequality. But most also think new ideas will emerge for preparing tomorrow’s workforce: 70% say new educational and training ideas will emerge in the next 10 years that can successfully train workers in the skills they will need for the jobs of the future. 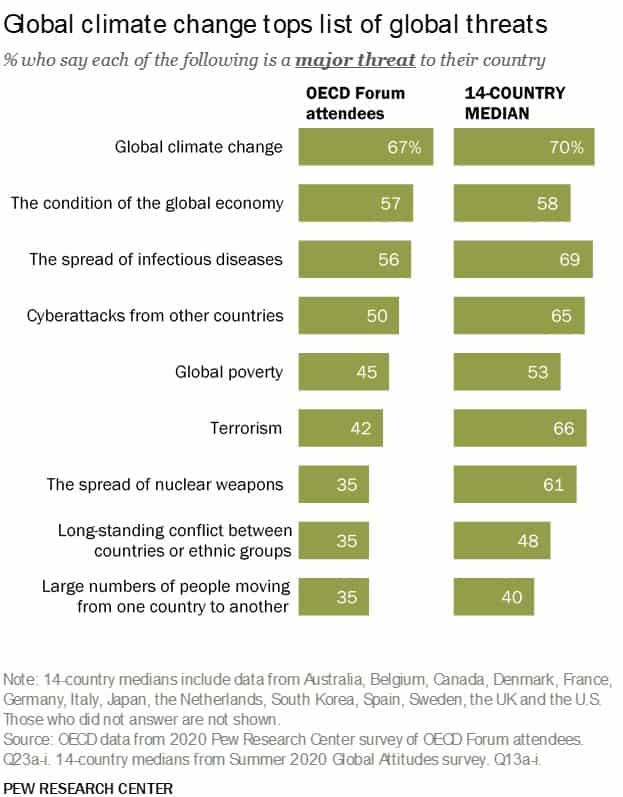 In addition to concerns about the pandemic and the economic future, OECD Forum participants—and general publics around the world—are also deeply worried about climate change. When asked to identify major threats facing their country, Forum attendees and respondents across the 14 nations polled this summer both identified global climate change as their top concern, with about seven-in-ten of each characterising it is a “major threat”. Majorities of both groups also saw the spread of infectious diseases and the condition of the global economy as major threats, but, strikingly, in a year of public health and economic crises, climate change nonetheless topped the list of concerns.

To deal with global threats, OECD Forum attendees favour multilateral approaches, and they strongly back the principles of international co-operation. Eight-in-ten say countries around the world should act as part of a global community that works together to solve problems. And 76% say their country should take into account other countries’ interests even if it means making compromises. Citizens of advanced economies also largely endorse this view, although their support for international co-operation is slightly less enthusiastic: the 14-country median of 58% say their country should consider the interests of others, even if that requires compromise. 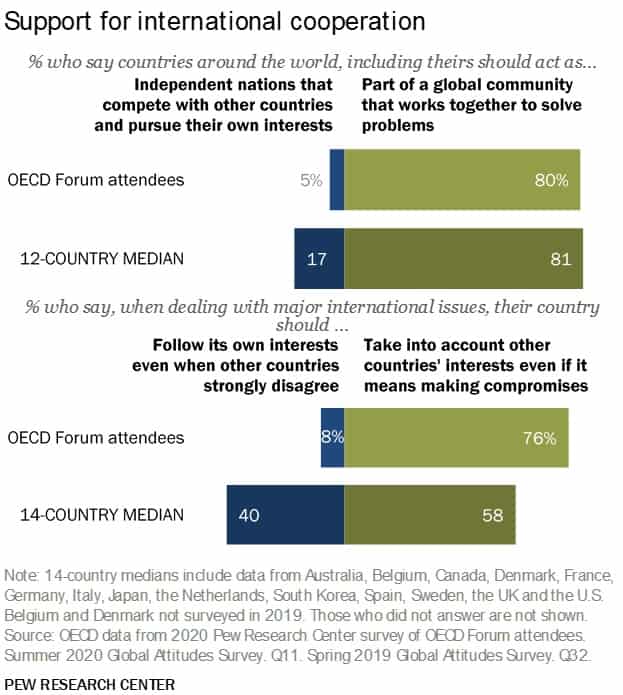 In response to an open-ended question about what ideas governments should consider as they plan for life after the pandemic, many respondents say they should focus on rebuilding our economies and societies in ways that address inequality and other deep-seated structural problems that have been around since long before the coronavirus outbreak. As they look toward 2021 and think about a post-pandemic world, many participants believe we need to assess what we’ve learned from the difficult experiences of the past year. One respondent wrote, “We have learned that we are more capable of big changes in the way we live our lives than we previously thought”, suggesting that one lesson from the trying period we have all endured is that major changes once thought impossible may in fact be achievable.

Richard Wike is director of global attitudes research at Pew Research Center. He conducts research and writes about international public opinion on a variety of topics, such as America’s global image, the rise of China, democracy, and globalization. Wike gives talks and presentations to a variety of audiences, including government, think tanks, business groups, and academic conferences. Wike received a doctorate in political science from Emory University. Before joining Pew Research Center, he was a senior associate for international and corporate clients at Greenberg Quinlan Rosner Research.
Follow

+1
Pascal Saint-Amans and 1 other
The OECD Forum Network
We use cookies to help improve your experience. By continuing to browse our website you are consenting to our use of cookies.
Learn more