Just over ten years since the 2007–2012 global food price crisis, which saw a sharp increase in the world's hungry population, the world is again witnessing another blow to the global food systems. The COVID-19 pandemic and the Russian war in Ukraine have generated two major consecutive crises that caused substantial increases in food prices and increased food insecurity, setting back any global progress toward the objective of ending hunger (UN 2022). Even while each of these crises had its own distinct causes, they all reveal one major problem: the high concentration in the global industrial food system at many levels.

The first, and most important concentration in the global industrial food system is the low number of staple crops on which the global food system depends. Of the 7000 edible plant species that were once grown as crops, today just four mainstream crops - known as the “Big 4” (maize, wheat, soybean and rice) - provide more than half of our calories worldwide. To add more complexity, the world’s exports and reserves of agricultural commodities are highly concentrated geographically, leaving the world vulnerable to price shocks, supply chain disturbances and climate change. According to the World Agricultural Supply and Demand Estimates (WASDE), 86% of all wheat exports come from just seven countries, while three countries hold 68% of global wheat reserves. The war in Ukraine has caused terrible losses in lives and illustrated the danger this concentration poses. The third concentration is due to the fact that a small number of companies control the world's grain trade, that is characterized by highly volatile commodity markets. The huge price increases in 2022 on the world markets, following the Russian war in Ukraine, has left those who live in low-income, food-import-dependent countries to bear the cost, resulting in rising hunger and increased food insecurity.

There is broad consensus, from a variety of sources, activists, policy bodies, international organisations, and scholars (HLPE 2020; IPES-Food 2022, etc.), that a radical change is needed to increase the resilience of the global food system to potential shocks, especially as the recurrent crises have exposed systemic weaknesses and vulnerabilities.

It would be a mistake to think that increased investments in the four mainstream commodity crops alone will be enough to ensure food security. This strategy may address the immediate symptoms of the acute crisis while leaving untouched the deeper causes of the malady. Continuing to rely on current global food chains delivering a narrow range of mainstream crops, susceptible to sudden supply chain shocks and long-term climate change, means that food security will remain threatened in continents where rapid population growth and changing diets based on processed products from mainstream staples have increased dependence on the international markets for food needs. Many countries in the Middle East, North Africa, and sub-Saharan Africa are heavily reliant on imports of grain from Russia and Ukraine, and the disruptions that we have witnessed because of the war in Ukraine have led to major concerns about food security in these countries as grain prices spiked (FAO 2022; UN 2022). It is far from clear that the price volatility is over given the continuation of the war and the recent concerns about the continuation of the UN-brokered deal to unblock Ukrainian ports that was supposed to enable some grain to make its way to global markets.

The current crisis could help turn a long-standing but neglected structural problem into an opportunity. Instead of a “more-of-the-same” model based on a small number of globally traded mainstream crops, the world needs to invest more in homegrown solutions.

Instead, the crisis should encourage us to radically transform our food systems, and work to make them more resilient. Fundamentally, that means more diverse food systems that rely on a diverse crop palette. Given the increasingly fragile, risky, unhealthy food systems and climate change threats, time is not on our side: taking a long time to gradually transform food systems to a more diversity-centered model would no doubt result in irreversible ecological damage, as well as continuing hunger. Increasing investments in “forgotten crops” as way to increase crop diversity, could act as a buffer to blunt the impact of shocks worldwide. These crops were forgotten by researchers, governments, funding and development agencies, but not by small-scale farmers who still cultivate them. This would require concerted action to break the concentration of industrial agriculture across multiple layers simultaneously by starting with the foundation: crop diversification.

The current crisis could in fact help turn a long-standing but neglected structural problem into an opportunity. Instead of a “more-of-the-same” model based on a small number of globally traded mainstream crops, the world needs to invest more in homegrown solutions. Rather than following the same policies that have failed to provide food and nutritional security for much of the world, or only investing in “silver bullet” technologies on the Big-4 mainstream crops that require ever greater inputs, the current food crisis provides an urgent wake up call to do things very differently. This requires, in ways that are complementary to the production of wheat, maize, soybean, and rice, transformational and significant investment in “forgotten crops” that have been abandoned in favor of imported products or crops. These include cereals, roots, tubers, grain legumes, oil crops, fruits and vegetables that are adapted to local palates and agroecologies, have high nutritional and cultural value, and are cultivated according to traditional management practices, which are also often more “climate smart”. Fonio (Digitaria exilis), Polish millet (Digitaria sanguinalis), guinea millet (Brachiaria deflexa)), Frafra potato (Solenostemon rotundifolius), Bambara groundnut (Vigna Subterranea), or taro (Colocasia esculenta) are just few examples of these crops.

Recent initiatives such as the Forgotten Crops Society, launched in July 2021, and the Global Manifesto on Forgotten Foods, call for concerted efforts by governments, academia, industry, and society that are urgently needed to advance research and development for all major, under-researched, and forgotten crops so that food security is achieved, and livelihoods are improved. They also recognize the central role of small-scale farmers and local communities as forgotten crops custodians of knowledge and agents of change, rather than mere recipients of technological advances.

We now have the chance to reconsider our current food system and determine whether we want a system that is more diverse, nutrient-dense, and climate-resilient, or continue business-as-usual. The global Covid-19 pandemic and a war in Europe should serve as a lesson to enhance investment in local and diverse foods and reducing our over-reliance on a small number of mainstream staple crops. The issue is whether we have the political will and social commitment necessary to change our current food system into a system that benefits both people and our planet and is fit for the future.

Learn about the OECD Meeting of Agriculture Ministers (3-4 November), where more than 45 Ministers of Agriculture from OECD Member and Non-Member countries will meet in Paris to agree on concrete actions to contribute to Building Sustainable Agriculture and Food Systems in a Changing Environment: Shared Challenges, Transformative Solutions

Michel Edmond Ghanem
Senior Researcher, CIRAD, UMR AGAP Institut; Co-founder & Chair, The Forgotten Crops Society (FCS)
Follow
Dr. Ghanem is a Researcher at CIRAD (UMR AGAP Institut), Montpellier, France and former Professor of Plant Physiology at Mohammed VI Polytechnic University (UM6P), Morocco. Before that, he was the Program Leader for Genetic Resources at the Pacific Community (SPC) in Suva (Fiji) and former Deputy Director for Research and innovation at ITK (France). Dr. Ghanem also served at the International Center for Agricultural Research in the Dry Areas (ICARDA) at the Consultative Group for International Agricultural Research (CGIAR) as Crop Physiologist, where he founded and lead the Crop Physiology laboratory. He holds an Agronomy Engineering degree and a Ph.D. in Plant Biology from the University of Louvain (UCLouvain, Belgium) and an Accreditation to Supervise Research (HDR) from the University of Montpellier, France. Dr. Ghanem served also as an Invited Professor of Plant Physiology at the University of Namur (Belgium). He also worked as a Research Fellow at the CEBAS-CSIC (Murcia, Spain). Dr. Ghanem is also expert at the Biosafety Advisory Council (BAC) of Belgium on transgenic plants and serves on the Executive Board of the Experts Working Group on Wheat phenotyping within the Wheat Initiative. His research expertise covers genetic resources, plant abiotic stress physiology, plant modeling, root biotechnology, and plant phenotyping. Dr. Ghanem is co-founder and current Chair of the Forgotten Crops Society (FCS). 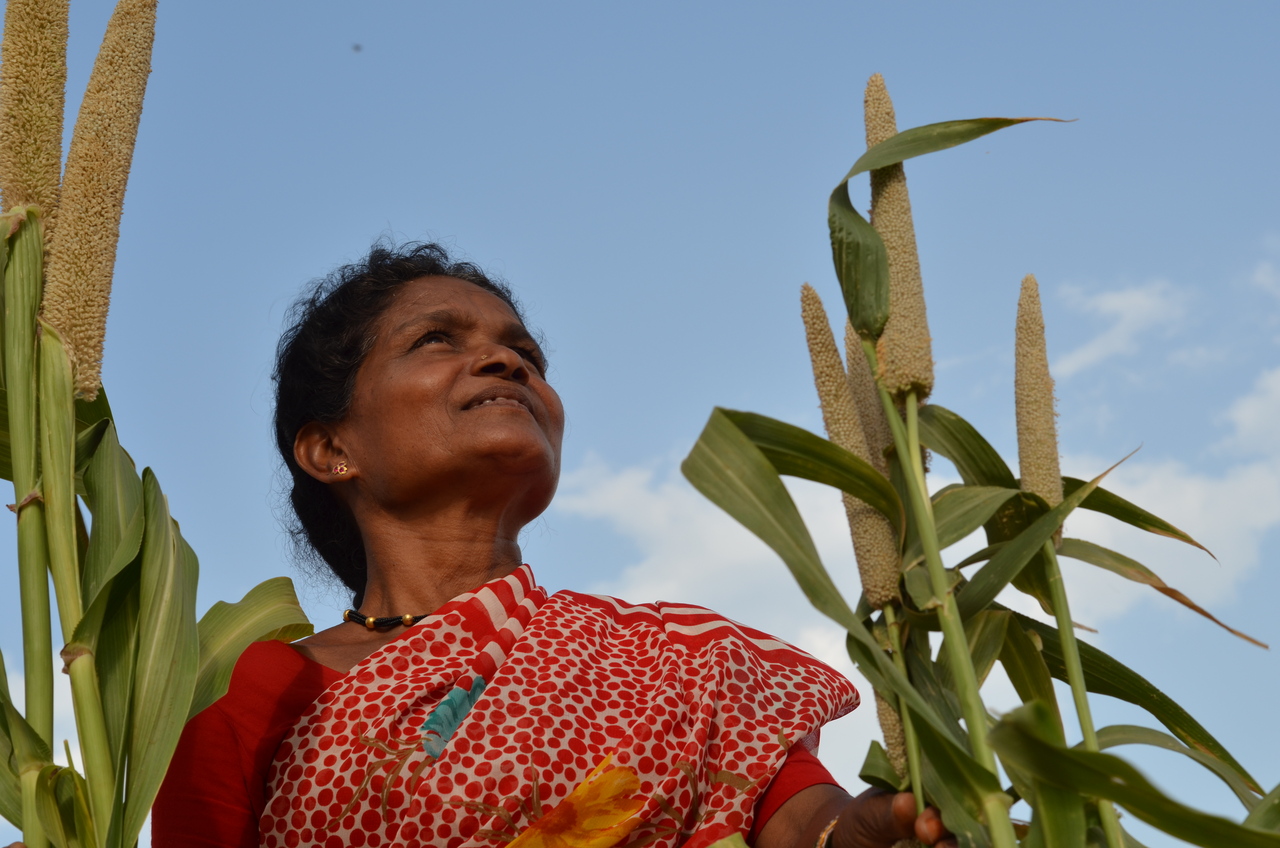 Today just four mainstream crops—known as the “Big 4”—provide more than half of our calories worldwide. More diverse food systems that rely on a diverse crop palette are urgently needed to make our food systems more resilient, explains Dr. Ghanem, co-founder and current chair of the Forgotten Crops Society.