Recently, the European Commission has initially endorsed Greece’s Recovery and Resilience plan. In the context of this plan €17.8 billion in grants and €12.7 billion in loans will be disbursed over the period 2021 – 2026. Thus, a historic opportunity for the country’s economy and production model restructuring lies ahead. Current times find Greece suffering from severe negative consequences derived from the COVID-19 pandemic, which have also brought to the surface a host of long-lasting structural malaises. A crucial task that “Next Generation’s” resources ought to address is the alleviation of the multiple, deep, ongoing, and emerging regional, socio-economic disparities across the country. To that extend, both the “Development Plan for the Greek Economy” (2020) prepared by the Committee headed by Nobel Prize in Economics Professor Pissarides (p. 31) and subsequently the “Greece 2.0. National Recovery and Resilience Fund” plan (p. 24) point out that addressing regional inequalities clearly reflected on specific indicators, such as unemployment and risk of poverty and social exclusion is a national challenge, while the “Medium-Term Fiscal Strategy 2022-2025”, makes mere mention – akin to meticulous acceptance – on “intensified intra-regional inequalities” (p. 74). Recent (June 22, 2021) Hellenic Statistical Authority’s press release coherently depicts the broader image of the population at risk of poverty both by Region and country, accentuating extant differences (e.g., Ionian Islands 11.2% - Western Greece 27.4%), in the context of a declining trend of the population at risk of poverty or social exclusion percentage, concluding to a 28.9% in 2020. 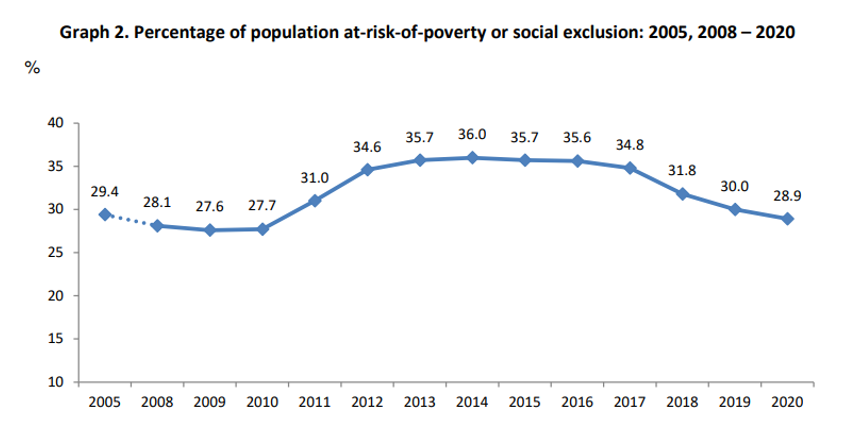 Respectively, the unemployment rate for the 2021Q1 was estimated at 17.1%, notably increased compared to the previous quarter’s (2020Q4) rate and that of the corresponding quarter (2020Q1) which was 16.2 %, finding Region of Central Greece at the top of the relevant table with 22.7% and Region of Attica with 13%, being at the bottom. These are just indicative components that confirm the forenamed reports and co-forge the framework of reasons why the incoming financial support should be proportionally, effectively and fairly allocated in the light of a regionalized perception. 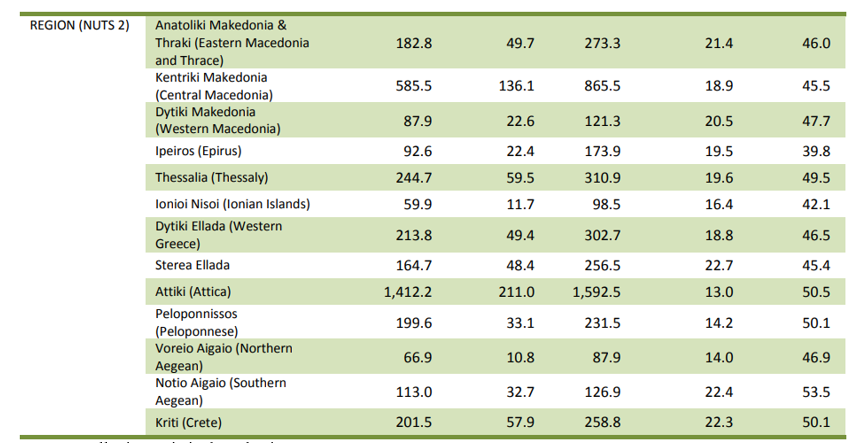 An additional representative example of why that should be done is the peculiarity of Central Greece. As OECD’s Regional Policy for Greece Post-2020 report highlights, Central Greece renders itself as a unique case in the EU-28, because the significantly higher GDP per capita can not be found in the Region’s capital or within one of its major urban areas but close the neighboring Region of Attica borders, while people commute to work not from the suburbs to the urban centre but the way round, considering themselves as extensive commuting flows from the neighboring area. As regards the social dimension of its profile, according to the same report, (p. 48) almost 6% of the Region’s population lack access to health services, whereas 74.3% of jobless people are long-term unemployed, and a notable 18.9% of those aged 15-24 years old are excluded from education or the labor market.

This kind of social-centered approach, not easily sensed in the extant plan, possibly required a broader and definitely time-framed consultation process, at a regional level – prior to the national plan’s submission to the EU institutions, on April 28, 2021 – rather than a process including inputs of 24 bodies in total, as the June 17, 2021 analysis of the Recovery and Resilience plan of Greece indicates (p. 31). From now on, handlings that not justice to the detailed work has been done so far or undermine what is foreseen, must be avoided. The proper elaboration of the additional consultation process among key stakeholders, going to be engaged in the implementation stage, is too important and demands a high sense of responsibility, unity, and collective action, towards a substantially progressive direction, that will eventually curtail one-sided perceptions and consequently strengthen the plan’s ownership. Otherwise the following question will still remain: “A plan made for the people and by the people?”

Find out more about the EU's NextGeneration fund, the temporary instrument designed to boost Europe's recovery 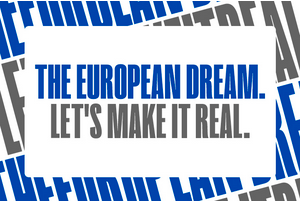 Back to A New Societal Contract for the Recovery
Next

Who’s helping me? Perceptions of social safety nets during COVID-19