If the metaverse is to become the main place where people come together and exchange digital goods or services, it needs interoperability. This is where blockchain technology's decentralised infrastructure comes to the rescue. Banner image: Shutterstock/ImageFlow
Primavera De Filippi
Faculty Associate, Berkman Klein Center for Internet & Society, Harvard University
Follow
Like Be the first to like this
0

This article, first posted on 3 October 2022, is part of a series in which experts and thought leaders —from around the world and all parts of society— discuss and develop solutions now and for the future. Opinions expressed do not necessarily represent the views of the OECD.

The metaverse is often described as a place where people can be anyone and do anything they want; a place where the impossible becomes possible. More specifically, it is a shared virtual space populated by “avatars”, which are digital representations of ourselves. But what does this all really mean?

The metaverse presents itself as something new: more immersive, open, interoperable and interconnected. But is really going in that direction?

The term “metaverse” was first coined by Neal Stephenson in his 1992 science fiction novel Snow Crash. In the book, the metaverse is depicted as a virtual world used by people to conduct business and socialise. The concept has been further popularised by the movie The Matrix, in which the characters enter a virtual world that is controlled by a computer program. While both of these science fiction stories present the metaverse in a slightly negative or dystopian light, today the term is often used to describe a positive vision of the future: one where people can interact with one another in virtual worlds that are increasingly social, playful and interconnected.

The metaverse presents itself as something new: more immersive, open, interoperable and interconnected. But is really going in that direction? Or is it rather following the same path as the internet we know today, with the emergence of a few dominant players that control the majority of the traffic and infrastructure?

The metaverse is often compared to the internet as both are virtual environments populated by digital agents interacting with one another from all over the world. However, there are some key differences. First and foremost, the metaverse offers a more immersive and interactive experience than the internet because it enables people to interact in a new spatial environment. Interactions can happen in a variety of ways, including chatting and playing games. But there’s also dancing and moving around in this new virtual space, in ways that were not possible before in the de-spatialised territory of the internet. Second, the metaverse is a place where people are not limited to reading or publishing content, (e.g. social media posts, online videos or interactive web pages): they also have the opportunity to interact with digital objects and infrastructures. Again, this is something that was inconceivable using the pre-metaverse internet due to its lack of spatiality.

Today, with the advent of blockchain technology and the associated Web 3.0, it has become possible to own digital assets in the same way as we own our physical assets.

Everything that circulates on Web 2.0 (for example blogs, wikis, e-commerce sites with customer reviews and social media sites) is at best digital content—things we buy online cannot be “owned” as a digital resource, so instead are only “licensed” to users according to intellectual property and copyright laws. Yet because the access to such content is managed by a central server, which acts as the middleman, if that server were to go out of business we would immediately lose access to all our digital assets.

Today, with the advent of blockchain technology and the associated Web 3.0, it has become possible to own digital assets in the same way as we own our physical assets. In other words, it is possible to replace our current model of online transactions based on “intellectual property” with a new system of “virtual property”, creating digital assets that we actually own.

Here’s how it works. A blockchain network is a decentralised database that maintains a record of all transactions made on the network. This means that every time you buy or transfer a digital asset, the transaction is recorded on the blockchain for anyone to see. This transparency is one of the key advantages of blockchain technology, as it enables multiple servers (and virtual worlds) to interact simultaneously with the same decentralised database without any of them laying claim to it. This means that no one can seize or otherwise reclaim ownership of a digital asset after it has been transferred to a new account, and any attempt to reproduce it would immediately be detected by the network. This explains why people are now willing to spend several thousand dollars—sometimes even several million—to purchase unique and authenticated copies of digital works, often referred to as Non-Fungible Tokens (NFTs), such as pixelated gifs or short animated videos.

The metaverse—as the new “spatial web”, or Web 4.0—has the potential to revolutionise the way we interact with the digital world through purchases of not only digital content (as per Web 2.0 and 3.0) but also digital assets. Clothes, shoes, bags or other accessories to wear; cars, planes, boats or other transportation vehicles to ride in; digital infrastructures such as houses, factories, farms or even specific parcels of land on NFT-based virtual worlds such as Sandbox or Decentraland to live in; all of this and more is on offer for our avatars.

If the metaverse purports to become the main place where people come together and exchange digital goods or services, it needs to provide a certain degree of interoperability.

One should remember, however, that in its ultimate manifestation the metaverse is not a single virtual world, but rather many across a giant, interoperable network. In theory, this means that anyone could create a new virtual world, with its own features and functionality, and connect it with the rest of the metaverse so that digital assets can be freely transferred. Indeed, one of the greatest added-values of the internet is its interoperability: what would you think of it if you could only send emails to people connected to the same mail server, or if you could only transfer files to people using the same service provider? It would probably lose most of its value.

If the metaverse purports to become the main place where people come together and exchange digital goods or services, it needs to provide a certain degree of interoperability. And interoperability in the metaverse is not limited to the realm of online communications: it also includes the realm of digital assets, with the important requirement to be able to transfer digital goods from one corner of the metaverse to the other. However, this type of interoperability requires digital objects to exist outside of the virtual worlds on which they have been acquired. This is precisely where blockchain technology comes to the rescue, providing a decentralised infrastructure to tokenise digital assets as NFTs, thereby allowing for users to transact these assets directly to one another without going through a central server.

One could argue that the only way to achieve a true manifestation of the metaverse is through the integration of Web 3.0’s blockchain technologies into the distributed spatial web of Web 4.0. Only then can we ensure a proper degree of interoperability between these digital worlds, enabling us to fully enjoy their new potential by ensuring that our digital assets can freely travel across the entire metaverse.

To learn more, check out also the OECD's work on Blockchain and distributed ledger technology and tune in to the OECD Digital Economy Ministerial Meeting, taking place on 13-15 December 2022

Primavera De Filippi
Faculty Associate, Berkman Klein Center for Internet & Society, Harvard University
Follow
Primavera De Filippi is a Director of Research at the National Center of Scientific Research (CNRS) in Paris, Faculty Associate at the Berkman Klein Center for Internet & Society at Harvard University, and Visiting Fellow at the Robert Schuman Centre for Advanced Studies at the European University Institute. Her research focuses on the legal challenges and opportunities of blockchain technology and artificial intelligence, with specific focus on governance and trust. She was a founding member of the Global Future Council on Blockchain Technologies at the World Economic Forum, and co-founder of the Internet Governance Forum’s dynamic coalitions on Blockchain Technology (COALA). Primavera is the author of the book “Blockchain and the Law,” published in 2018 by Harvard University Press (co-authored with Aaron Wright) and she was recently awarded a € 2M research grant from the European Research Council (ERC) to investigate how blockchain technology can help improve institutional governance through greater confidence and trust, and how it can contribute to global governance. In addition to her academic research, Primavera acts as a legal expert for Creative Commons and is part of the stakeholder board of the P2P Foundation. As an artist, she produces mechanical algorithms that instantiate her legal research into the physical world, such as the Plantoid project. 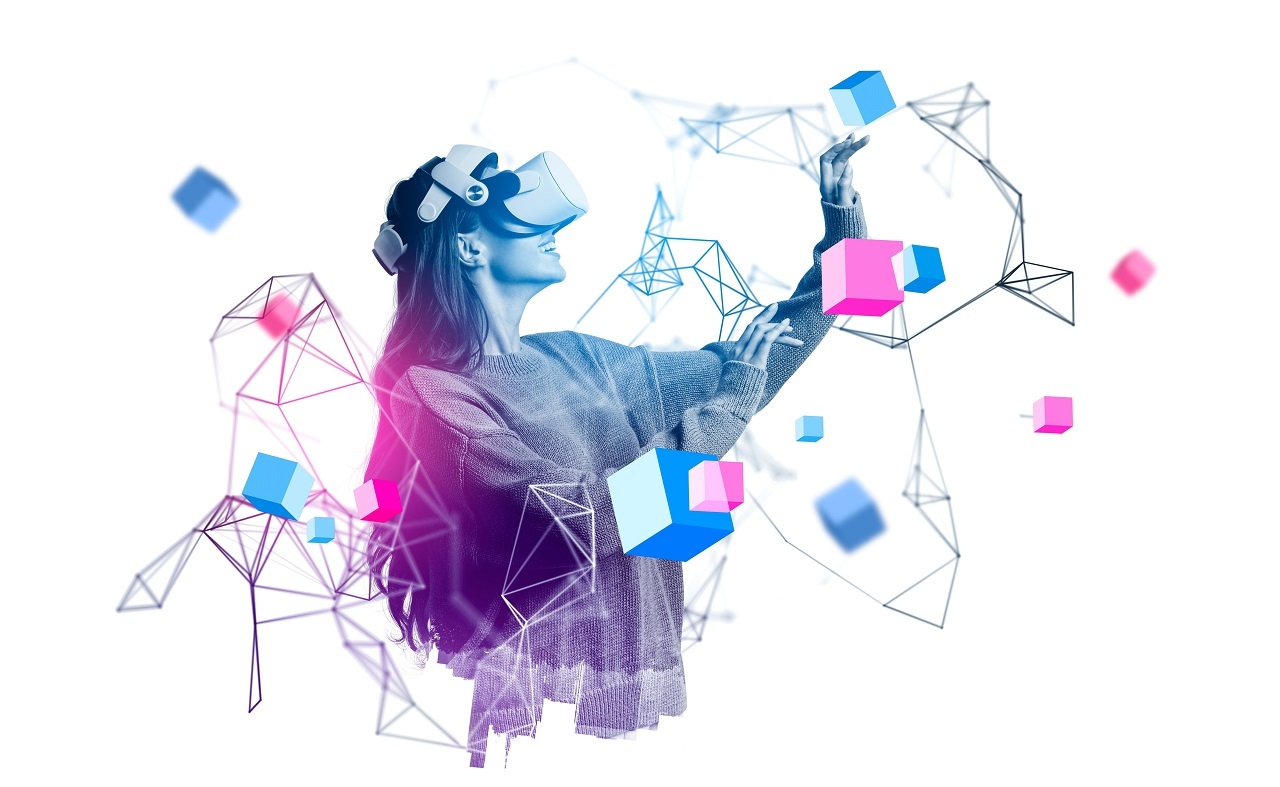 If the metaverse is to become the main place where people come together and exchange digital goods or services, it needs interoperability. This is where blockchain technology's decentralised infrastructure comes to the rescue.