Digital platforms can be used in transformative ways for awareness raising, advocacy and collaboration. But they will continue to be a space where harm against women and girls is perpetuated if adequate measures, policies and legislation are not put in place. Banner: COFEM/Young Feminist Europe
Antonella Crichigno & Nassima El Ouady
Advocacy, Policy and Research—GBV Co-ordinator; Lead, Alliance-building and Activity Co-ordination for Europe, Young Feminist Europe; COFEM
Follow
Like Be the first to like this
0

Information communication technologies play a crucial role in development and offer great potential to improve the quality of our lives. The recent pandemic has demonstrated how access to internet and digital platforms provide unprecedented opportunities for real-time communication, co-ordination and access to information. However, not everyone is able to enjoy these benefits equally, as traditional structures of inequality are being replicated in the digital space. One example that illustrates this is the prevalence of online gender-based violence (GBV), with 3-in-4 women experiencing it.

We at Young Feminist Europe and at the Coalition of Feminists for Social Change (COFEM) are concerned by this trend, so we decided to join efforts and launch our #BeAwareOfTheMalware campaign aimed at shedding light on online GBV, particularly against women human rights defenders.

Here’s what we’ve found out.

GBV encompasses any harmful acts directed at an individual based on their gender. This includes physical violence, sexual harassment, psychological violence and sexual assault, among others. With over 1-in-3 women and girls affected, GBV is disproportionately perpetrated against women and girls, including transwomen.

All forms of GBV share the same root cause: gender inequality and the oppression of women, girls and gender non-conforming persons.

Online GBV is when the abuse is carried out using the internet and/or mobile technology. It includes cyberstalking, cyberbullying, online sexual harassment, doxxing and online hate speech. Despite often being perceived as less serious, online GBV is a violation of human rights and it has important consequences on health, well-being and income. More than a third of women state that online violence has led to mental health issues. Online GBV can also go hand in hand with real life GBV: for example, online hate speech and doxxing can escalate to physical harassment or violence, and abusive partners are increasingly using stalking softwares or revenge porn to monitor, threaten and humiliate their partner.

All forms of GBV share the same root cause: gender inequality and the oppression of women, girls and gender non-conforming persons. Women in countries with long-standing or institutionalised gender inequality tend to experience online violence at higher rates.

Online GBV doesn’t just happen; someone makes the choice to use it. The common denominators for online GBV are that perpetrators tend to hold patriarchal beliefs of male and heterosexual dominance, and that the abuse happens in a cultural and institutional context that normalises violence against women, girls and gender non-conforming people. We can list three main categories of perpetrators:

Women human rights defenders are particularly exposed to online sexual harassment and GBV due to the nature of their work; they are specifically targeted  because of their gender, race, ethnicity, sexual orientation and their identification with feminist and women’s rights movements. More than 1-in-2 women European parliamentarians reported sexist online attacks on social media. Those dedicated to the fight for gender equality and ending GBV are particularly targeted. A study from Amnesty International found that, compared to white women, women of colour—and particularly black women—were more likely to be impacted by hostile or abusive tweets (34% and 84%, respectively).

Online GBV against women human rights defenders often tries to diminish their credibility, silence them or discourage them from pursuing their fight for the realisation of gender equality and women’s rights. This has important consequences on their civic and political participation, as well as on their economic opportunities. In a recent study, the Economist Intelligence Unit found that 3 out of 4 survivors of online GBV were afraid of online violence escalating into real world threats, and 1 out of 3 said they thought twice about posting any content online.

Digital platforms can be used in transformative ways...but they will continue to be a space where harm against women and girls is perpetuated if adequate measures are not put in place.

Online GBV needs to be analysed in the broader context of gender inequality and anti-rights movements. When the work of human rights defenders is perceived as threatening the structures of gender inequality, there is a pattern of backlash and abuse perpetrated by patriarchal systems and individuals benefiting from the status quo. This includes perceived threats to “traditional” conceptions of family, gender roles, religion and culture. Additionally, the rise of far-right parties, religious fundamentalism, populism and authoritarianism directly impacts the work of women human rights defenders.. For example in Europe, there are concerns about how some far-right governing bodies have been driving a patriarchal political agenda, encouraging the withdrawal from the Istanbul Convention that seeks to end GBV, restricting women’s reproductive rights, shrinking spaces for right-based civil society, undermining independent journalism and challenging LGBQTI+ rights.

Digital platforms can be used in transformative ways for awareness raising, advocacy and collaboration. But they will continue to be a space where harm against women and girls is perpetuated if adequate measures, policies and legislation are not put in place. Joint efforts between sectors and stakeholders are essential to combat online GBV. We need stronger national and regional legislation, and policies that work across sectors including digital industry, media and communication, cybercrime and public health. The tech and online industry needs to be held accountable to help mitigate the perpetuation of online GBV and its impacts on survivors. We need more investment in training, education and awareness raising on online violence and safety for individuals and institutions.

Online GBV against human rights defenders diminishes women’s civic and political participation. It is therefore urgent for the international community to prioritise this issue.

Antonella Crichigno & Nassima El Ouady (She/Her)
Advocacy, Policy and Research—GBV Co-ordinator; Lead, Alliance-building and Activity Co-ordination for Europe, Young Feminist Europe; COFEM
Follow
Antonella Crichigno (She/Her) Third-wave feminist, always interested in opening her mind and eyes to new realities. She holds a master's degree in Women's and Gender Studies and works as a project manager. Within Young Feminist Europe she is a member of the Advocacy, Policy and Research working group, where she leads the work on gender-based violence. Be Aware Of The Malware is her first campaign as co-leader. Nassima El Ouady (She/Her) Nassima is a feminist development practitioner in the international cooperation sector. She is passionate about gender and social justice. Her work focuses on applying an intersectional feminist lens to project development and advocacy initiatives. Within COFEM, she leads alliance-building and activity coordination for the region of Europe. 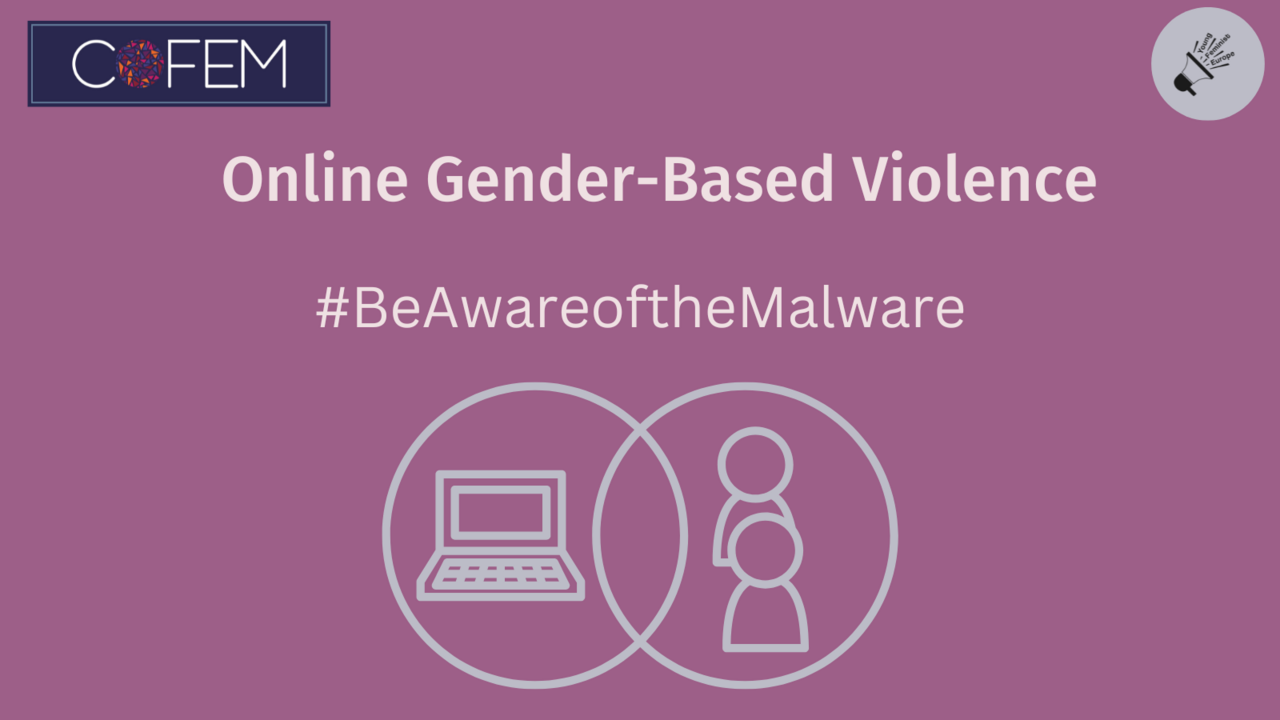 Digital platforms can be used in transformative ways for awareness raising, advocacy and collaboration. But they will continue to be a space where harm against women and girls is perpetuated if adequate measures, policies and legislation are not put in place.