The climate crisis is a water crisis: Houston, Bangladesh, and Sierra Leone demonstrate the urgency of the problem. The Netherlands, as a water nation, is often requested to share its expertise with the rest of the world. Henk Ovink, Special Envoy for International Water Affairs for the Netherlands and Sherpa to the United Nations & World Bank High Level Panel on Water, explains why whoever believes that repairs and dyke improvement investments are enough will have to think again.

2018: again a more disastrous year, more costly and with more deaths and despair. More droughts, floods, refugees, conflicts and inequality. In 2015, we set down a climate agreement and endorsed the United Nations Sustainable Development Goals (SDGs). But paper alone will not change the world and, across the globe, we still repair the damage caused by natural disasters rather than committing to prevention or increasing our resilience for this uncertain future.

The Netherlands has been engaged in the latter for more than a thousand years, ever since the creation of our first regional water authorities. Water is central to our culture: embedded in our landscape, in our way of life, in legislation and an area of action and focus for the government, business, civil society and academia. Along with the Netherlands, the majority of the world’s population lives in cities beside rivers and coasts. Prosperous locations, no doubt, but increasingly vulnerable as a result of climate change: according to the UN, the number of extreme weather related disasters has tripled annually since 1980. Faced with more frequent and stronger storms; faced with more rain, simply because warmer air can contain more water, as we all saw in Houston with hurricane Harvey. And where our systems really fail is where the poorest and most vulnerable live, at the mercy of the disasters we have helped to cause.

The climate crisis is a water crisis: nine in ten natural disasters are water-related. According to UN estimates, between 1995 and 2015 wind and water caused USD 1,700 billion worth of damage worldwide. Without water there is no energy, no food. Too much water and increasing “extremes” go hand in hand with far too little water; periods of drought align with flows of refugees and conflicts. While we are depleting our natural water supplies at a ruinous rate, sea level rise is jeopardizing our cities and deltas. Without water it is women and kids that have to walk to the wells; with water, these women carry their communities towards more prosperity while their kids go to school and progress even further.

So, the choice between prevention and repair is false. Both are essential. We need to start at the source: to reduce greenhouse gases and make efficient and careful use of our planet and all its resources. Yet at the same time, we need to prepare boldly, comprehensibly and inclusively for tomorrow’s extremes.

“Never waste a good crisis”; of course, catastrophes open up opportunities. But only if we think big and, at the same time, take care of and include the victims and those left vulnerable after a disaster. Someone who has lost their house, business or loved ones only wants to turn back the clock. In such cases a disaster is not an opportunity but rather a reason to turn away from the future, and then despair and distrust feed denial.

After it hit in 2012 I joined President Obama’s Hurricane Sandy Rebuilding Taskforce to work on the recovery of New York. On a wall in New Jersey someone had painted: “We All Hate You Sandy”. It fed my conviction that by involving everyone in the recovery of their city –not just building a dyke, but considering urban development more holistically, including the separation of rich and poor neighborhoods – we could give them a new perspective. And that meant investing in the future of people, rather than investing only in infrastructure.

There is no time to waste: the Harveys of this world will not stop. On the contrary they are the new normal, becoming more extreme year by year. Climate change is a slow process – “even slower than Congress”, we used to joke in the White House – but we have no time to waste. The need for fast results is an ideal opportunity to set up a good business case combined with political action: long enough for political ambition, and short enough for the political reality of a single term; ambitious enough to be attractive, and short enough for targeted actions. Five years gives us hope. We can and we must act now. 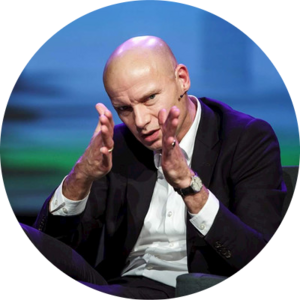 Henk Ovink was appointed by the Cabinet of the Netherlands as the first Special Envoy for International Water Affairs in 2015. As the Ambassador for Water, he is responsible for advocating water awareness around the world, focusing on building institutional capacity and coalitions among governments, multilateral organisations, the private sector and NGOs to address the world’s pressing water needs and help initiate transformative interventions.

He is Principal for Rebuild by Design, the resilience innovation competition he developed and led for President Obama's Hurricane Sandy Rebuilding Task Force. His last book, written together with Jelte Boeijenga, ‘Too Big. Rebuild by Design: A Transformative Approach to Climate Change’ explores the recovery work post Hurricane Sandy as a learning opportunity.

To ensure long-term continuity, Henk Ovink plays an active role in academia. He holds a research position at the University of Groningen and teaches at  the London School of Economics and at Harvard Graduate School of Design.

In January 2018, Henk Ovink was awarded honorary membership of the Royal Institute of Engineers of the Netherlands for his ‘global water work’.

In February 2020, he was awarded the IHS Urban Professional Award for his contribution to the field of resilient cities.