Europe’s Migrants: Clearing a path to the labour market

Inequalities in Europe, both real and perceived, have proved to be a significant economic and political challenge in recent years. Juan Menéndez-Valdés and Klára Fóti, Director and Research Manager at Eurofound, describe how integrating migrants into the workforce strengthens the European labour market.

Europe’s labour market derives its strength from its diversity and, in that regard, Europe’s new migrants may bring with them creativity, dynamism and innovation to an ageing workforce. But to harness this potential we need to put the right policies and strategies in place. There has unfortunately been limited evidence of such achievements to date. More experience is needed to assess measures currently in place, particularly in relation to implementation.

The large inflow of refugees in recent years, especially in 2015, has posed significant challenges for Europe. After the initial humanitarian crisis, longer term solutions had to be found; labour market integration in Europe is vital, not only for social integration and inclusion, but also for economic and political cohesion.

It’s about geography, not borders

As emphasised at the OECD Forum, every European country has been affected by the recent refugee crisis. It is not an issue that is confined to national borders, or that can be looked at in isolation. Eurofound’s report on the labour market integration of refugees and asylum seekers looked at the practical measures that have been taken in a number different European Union (EU) member states, as well as EU-wide initiatives. One of the clear lessons from this research is that integrating new migrants into the labour market is not simply a question of skills or legal procedures; it also involves living conditions, geographical distribution, incentives for employers, and education.

Even if the geographical distribution of asylum seekers and refugees is consciously planned, there is no guarantee that there will be job opportunities near reception centres and locations where migrants are being accommodated.

Geographical distribution is also an important aspect when it comes to preparing refugees for employment. In Austria a nationwide apprenticeship placement scheme has been introduced. The rationale is that apprentices are lacking in the western and southern part of the country, whereas many young refugees arrived to Vienna. The aim of the scheme, which is supported by employers, is to encourage refugees who come to Vienna to resettle in other parts of the country.

The volume of asylum seekers since 2015 has led to an increased use of temporary asylum. The provision of temporary asylum can weaken refugees’ position in the labour market since it may deter employers from hiring, offering longer-term contracts or investing in training. This further exacerbates pre-existing disadvantages such as linguistic barriers and unfamiliarity with social and employment norms. In Sweden, it is possible to change immigration status once employed, which paves the way to a permanent residence.  Swedish trade unions, however, warned that in a desperate effort to get such a status, applicants could be compelled to accept almost any job offer, which could further aggravate their vulnerability and increase the risk of exploitation.

Other restrictions, such as those on family reunification also have an impact, as separation from family members and insecure residence statuses can divert refugees’ attention away from integrating into their new homes and new lives.

Recent experiences have also pointed out new challenges. So far, even some promising initiatives have not had a major impact. Further, in Austria only a few people finished the so-called Voluntary Integration Year, which includes training and integration measures such as German language courses and recognition of diplomas, in a recognised organisation. The reason for this could be that the requirements were too strict. In Sweden, fast-track initiatives for refugees into occupations where there were high levels of staff shortages have also benefitted a relatively small number of people. This can be explained by the fact that the initiative requires a lot of resources both from the employment services and the employers themselves.

The EU encourages member states to share good practices among each other. No doubt, this can be beneficial to overcome challenges affecting several countries across Europe. At the same time, the overall economic situation of the individual member states is also important, since the success of labour market integration depends to a large extent on the capacity of the labour market to welcome new arrivals. This is especially true in Germany, Sweden and Austria. Another factor playing a crucial role in success is the extent to which migrants’ skill profiles match available jobs. In the case of refugees, this could be a particular challenge.

Focusing on the future

Europe has changed. The temporary measures brought in from 2015 to deal with the influx of migrants were a necessity to allow countries to adapt quickly to new challenges. We now need to focus on the future, to build strong bridges to the labour market and unite Europe through the strength of its diversity.

Future policies should include anti-discrimination measures (for example, to address discriminatory recruitment practices) while also introducing specific integration measures for family members and labour market policy measures which can meet the specific needs of migrants, including refugees. 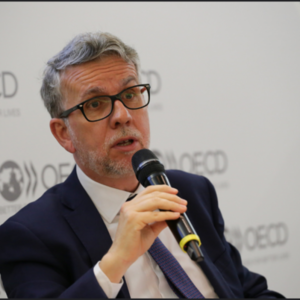 Summary of the OECD Closed Roundtable on the impact of COVID-19 on women: Spotlight on women in STEM
Gender Equality Future of Education & Skills Future of Work
Inclusive Growth

Falling through the Cracks: COVID-19 and undocumented people in Europe

Jacques Vandenschrik
The OECD Forum Network
We use cookies to help improve your experience. By continuing to browse our website you are consenting to our use of cookies.
Learn more