The debate started by acknowledging that we move for many reasons: in search of new opportunities; or to escape conflicts and persecution. Having said that, it was agreed that the distinction between “migrant” and “refugee” is very important to make when discussing migration and integration, and that confusing the terms can lead to problems for both populations. Jean-Christophe Dumont, Head of International Migration Division of the Employment, Labour and Social Affairs directorate at the OECD, explained that the term “migrants” includes all people who are moving across borders, with the exception of tourists and those on short trips. They are admitted under different grounds, such as work (economic or labour migration); education (student migrants); to form a family or to accompany or reunite with family member (family migration); or international protection (refugees). He noted that it is important to remember that asylum seekers who are denied asylum are neither refugees nor economic migrants, but persons who were not found to be in need of the international protection for which they applied.

He also highlighted the need to better understand the barriers that businesses face in hiring refugees and migrants, and mentioned those firms that understood the value of diversity would be better equipped to benefit from an inclusive workplace. Though public policy is central in the discussions about migration, the business community, too, plays a key role in the integration of refugees and migrants and in shaping a labour market that is skilled, employed and engaged.

Consensus emerged on the fact that, though much of the empirical evidence on the impact of migration in host countries focuses on the national level, it is mostly felt locally. As the conditions for integrating migrants and refugees are not the same, working together with local stakeholders would reinforce the work done at the national level. Without adaptation to local conditions, global ambitions are destined to fail. Yasmine Kherbache, Member of Flemish Parliament, Belgium, stressed the presence of divergences in the labour market that cannot be explained as anything else other than pure discrimination and that legislators need to recognise and fully decipher this problem.

Keeping in mind that many refugees and migrants that are crossing the borders today are children doing the journey on their own, we have a responsibility to help. Jonathan Wittenberg, Rabbi of the New North London Synagogue, United Kingdom, talked about the need for better infrastructure for integration. The religious community and moral duties also play an important role in this process, especially in terms of psychological healing. Access to education is critical for refugee children to recover from conflict and integrate into society.

Successful integration requires comprehensive, well-tailored measures that take into account an individual's country of origin, educational background and family situation. In this sense, the business sector has a significant and valuable role to play in recognising the positive benefits of migration and to welcome refugees and other migrants into the workforce in innovative ways. Assessing, activating and developing migrants’ and refugees’ skills is key. This includes recognising that in some cases it is necessary to build on existing skills rather than to ignore them because they do not easily fit.

Anki Elken, Head of Sustainability and Public Affairs for Randstad, Sweden, stressed that adapting to the conditions of a new labour market is not the sole responsibility of the migrant or refugee – the public and the private sector need to adapt themselves to their diverse skills. Ranjith Kumar Prabhakaran, 2013 Finnish Mr. Immigrant Laureate, agreed, adding that not only is it necessary for recently arrived migrants and refugees to learn the language of their host countries, but also that it is very important that they be supported in this, both in the workplace and the community in which they live. Kristina Persson, former Minister for Strategic Development and Nordic Cooperation, Sweden, and Founder & Senior Advisor of Global Utmaning, gave an example of so-called "social entrepreneurship", where local authorities and companies connect to find job opportunities for immigrants.

Unemployment has an enormous negative impact on mental and physical health, while well-being and resilience are closely linked to employment rates. This is why integration and the promotion of entrepreneurship are key. Matthew Saltmarsh, Senior Communications Officer for the Middle East, UNHCR, argued that entrepreneurship and the creation of companies in conflict-affected countries can, in fact, be an effective way to reduce or end violence. Investing upfront to allow refugees and migrants to settle in and develop their skills produces medium- to long-term economic and social benefits.

The debate concluded with a discussion on the importance of collective and individual responsibility and the need for a social infrastructure that is adapted to a society with increased mobility. Both the public and private sectors need to invest in the potential that migrants and refugees have to offer and both sectors need to be part of the conversation, together with migrants and refugees themselves, the new inhabitants of the society.


Got a few more minutes?

Read the OECD report “Making Integration Work: Refugees and Others in Need of Protection” 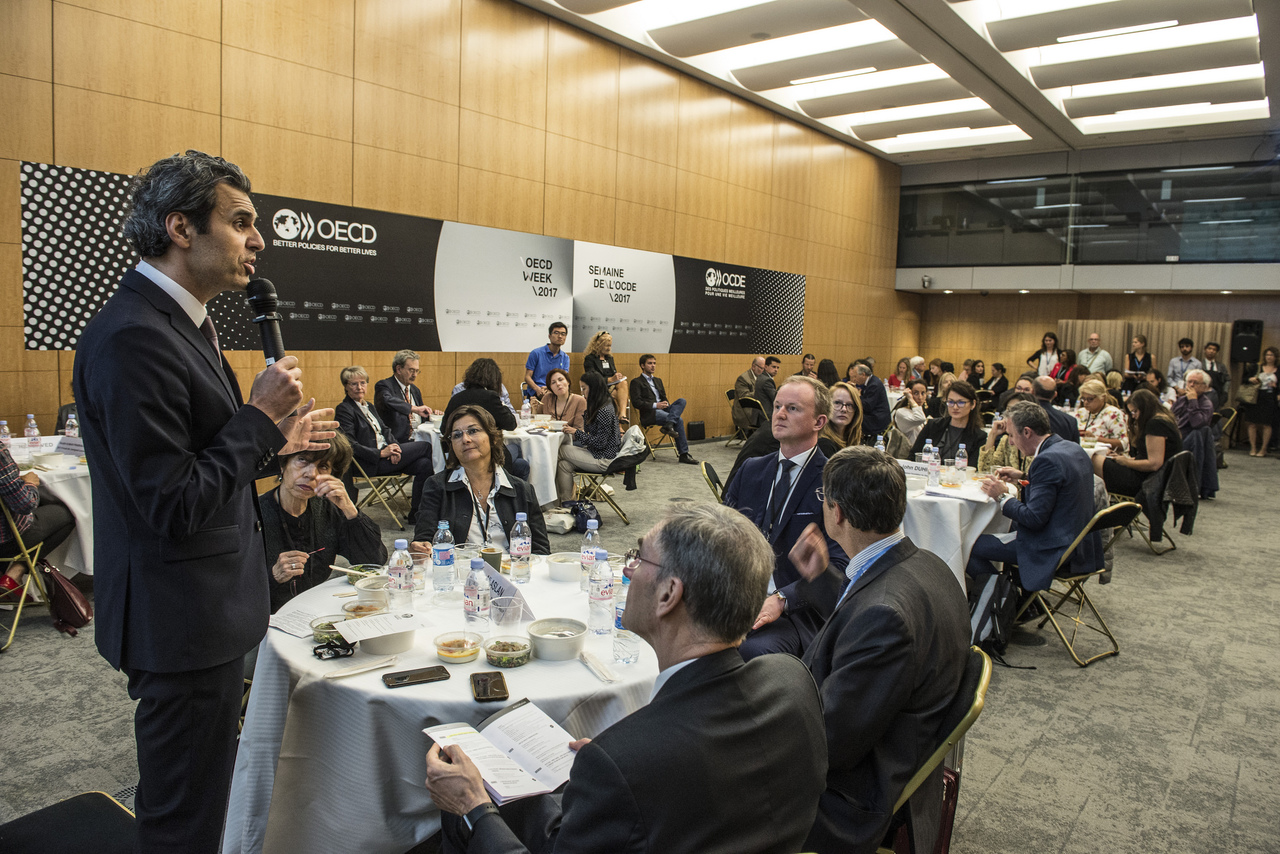