Across both developing and developed countries, cashless societies are gaining currency, with cash transactions appearing to decline. Mobile banking is credited for having fostered the financial inclusion of the ‘unbanked’ and lifted millions out of poverty in Kenya and China, but in wealthy cities such as Amsterdam, homeless people selling street magazines struggle to find customers still using cash. The promises of digital payments are vast and numerous but carry their own set of risks.

Spurred by digital innovations, new ways of conducting payments are rapidly gaining ground at the expense of cash transactions. From India’s high-denomination banknote ban, to the UK where electronic payments overtook the use of notes and coins in 2015, cash transactions appear to have entered a steady decline. In Scandinavia, cash has grown rare to the point that the world’s oldest central bank, Sweden’s Riksbank, is now considering issuing a digital currency to adapt to citizens’ evolving expectations.

Although some have come to believe that cash will soon appear as outdated as carrying a pouch full of gold in the age of mobile banking, bitcoins and ‘tap and pay’ cards, Deputy Governor of Riksbank, Cecilia Skingsley, reminded the audience that cash will continue to serve as a store of value. Yet, the central banker agreed that its days as a means of payment may be numbered. While Tadeusz Kościński, Undersecretary of State for the Polish Ministry of Economic Development, emphasised that customer experience is a powerful driving force, CEO of MBILLS Primoz Zupan stressed that customers have come to expect immediacy. Significant disparities exist between countries as cultures and histories continue to shape citizens’ views toward electronic payments, but the fact remains that with the advantages of digital transactions growing ever more apparent, consumers around the world are abandoning physical money en masse.

The question is not whether we are heading toward cashless societies but rather, ‘How are we going to become cashless?’

Many praise this evolution, regarded as a way to increase efficiency, lower costs associated with cash and tackle corruption and the black market. Ranging from increased monetary room for central banks to lower security hazards for retailers, the promises of digital payments are vast and numerous. Perhaps most important of all is the impact on financial inclusion. As pointed out by a number of participants from the audience, mobile banking is credited for having lifted millions out of poverty by fostering the financial inclusion of the predominantly rural ‘unbanked’. Tadeusz Kościński concurred with this, stressing that mobile banking has allowed countries with relatively underdeveloped banking systems to leapfrog traditional evolution. In Slovenia too, mobile wallet solutions such as Primoz Zupan’s MBills help put people on the map. However, Hans van Dalfsen, Editor-in-chief of Z! magazine, offered words of caution by stressing that bridging digital divides remains necessary to enable everybody – including vulnerable groups, such as homeless people, that risk further marginalisation due to the rarefication of cash – to harness the promises of digital payments.

In the words of Gianluca Riccio, Head of Strategy and Framework in Commercial Bank Risk (CBR) at Lloyds Banking Group and Vice Chair of the BIAC Finance Task Force, the question is therefore not whether we are heading toward cashless societies but rather, “How are we going to become cashless?” In this regard, it is worth noting that digital payments also carry their own set of risks. For one, loss of privacy may well be the price to pay for a cashless society. Electronic payments can be tracked and the troves of data engendered by their rise are bound to stir the appetites of state actors, cyber criminals and private bodies alike. And while Tadeusz Kościński highlighted the trade-off for customers between the greater convenience of digital payments and their perceived risks, Gianluca Riccio stressed the importance of continued investments in cyber security. On the regulatory front, a common framework appears premature as countries stand at very different stages in this transition, but a co-ordinated approach will remain necessary to address arbitrage opportunities and issues linked to cross-border exchanges of data.

As panellists looked upon our cashless future, it was made clear that to harness the benefits of the digitalisation of money, it will be necessary to concurrently manage its associated risks. By examining the two sides of the coin, the session assessed both the potential advantages and latent pitfalls of digital payments, and explored how our future cashless societies may help bridge divides rather than reinforce existing ones.

OECD report, Key Issues for Digital Transformation in the G20 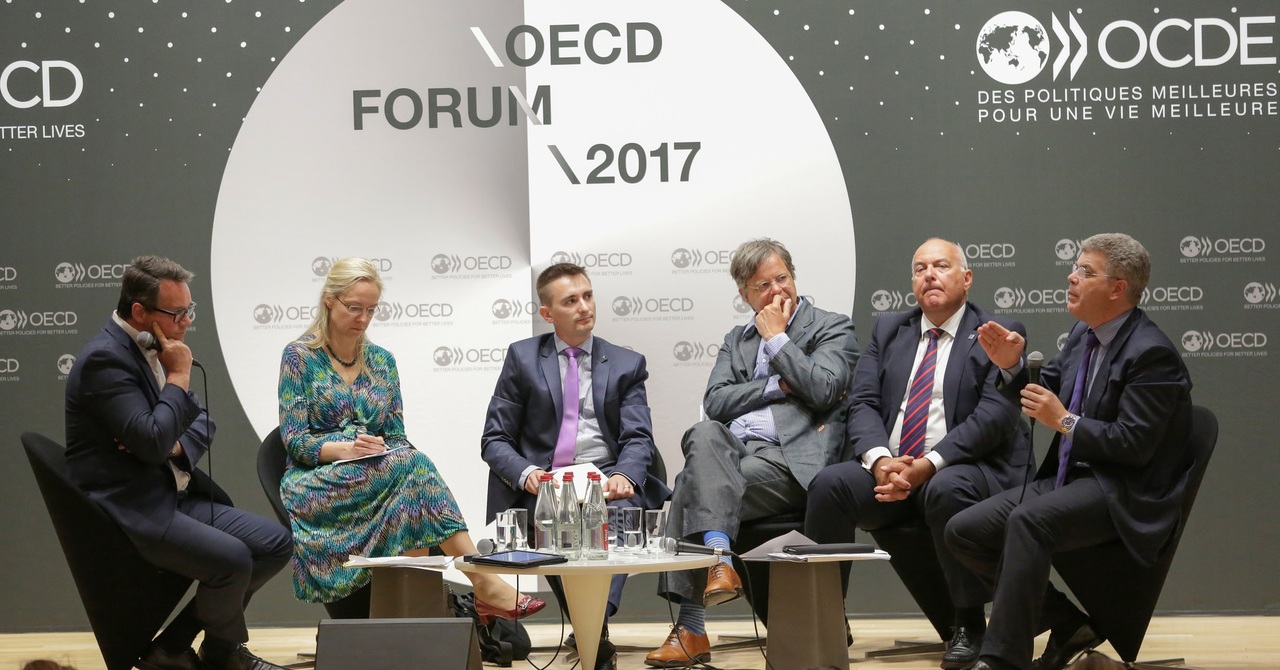 A look back at the Forum 2017 session