During the Forum discussion dedicated to Bridging Divides, participants were asked who they felt could do most to address the growing divides in our societies. It was clear from the rate of response (46%) that governments have a key responsibility to help find solutions; participants also had a high expectation of civil society (34%), but expected less in terms of solutions by business (14%), trade unions (2%) or media (4%).

This high expectation of governments was surprising as they have not been regarded as effective in dealing with the crisis. People’s trust in them has sunk to historically low levels and there is much doubt about their ability to respond to the fast pace of technological change, deindustrialisation and demand for millions of decent, sustainable jobs.

Sharan Burrow, General Secretary of the International Trade Union Confederation, referred to research conducted by trade unions in 14 OECD and G20 countries: 73% of correspondents were frightened of losing their jobs and 50% were concerned about the future of their children. 85% of people polled did not believe that power to address growing levels of inequality lies with government. They thought the power lies with business and in particular with the 1%. This imbalance has to be addressed, and it has to be addressed by all stakeholders working together.

Chris Lehane, Head of Global Policy and Public Affairs at Airbnb, mentioned that technology is getting ahead of other developments in society, and he felt that companies like Airbnb have a responsibility to help address the fact this has increased productivity, yet wages have stagnated. Sharan Burrow mentioned that trade unions are in dialogue with the so-called platform companies to discuss issues such as employment contracts, social protection, responsible business conduct and tax but governments are not engaging in these types of discussions on how best to regulate the new world of work. It is this absence that is causing fear and mistrust.

According to Michel Landel, CEO of Sodexo, companies have the responsibility to act like a “social elevator” in providing respectable and sustainable jobs that provide people with purpose and direction for their lives. Salil Shetty, Secretary General of Amnesty International, continued that “it is not whether globalisation is good or bad”. He questioned what that even meant, and the panel agreed that globalisation is a fact of life and has brought many benefits. However, there is a need for a new social contract, a social licence to operate and, according to Michel Landel, “a general generosity of spirit, placing people at the centre”.

Salil Shetty saw the root cause of inequality as discrimination of women, indigenous peoples and religious and racial minorities. Not only are our societies facing deepening divides, but also increasing attacks on trade unionists and activists fighting corruption or on behalf of the environment and human rights. Of 94 countries across the world, activists have been killed for raising their voices in 22.

The focus is often on inequality of income, but there are also significant levels of “voice” inequality as not all segments of society have the capacity to raise their voices and hold governments to account. Even civil society organisations such as Amnesty International operate in silos, disconnected from voices that may be expressing discontent about local conditions. In this context Salil Shetty mentioned that even though about 50% in the UK voted for Brexit, no-one in Amnesty International’s office there knew anybody who had voted Leave.

The media landscape has now become so diverse that people pick and choose who they listen to and trust regardless of being provided with objective facts. This has decreased the influence of traditional media, previously an important Fourth Estate and an influential check on the power of both government and business.

For the first time in decades, today’s children are likely to be poorer than their parents when they grow up. But despite this, the panel was quite optimistic that millennials will be the generation that will be able to address the challenges that our society is confronted with. Chris Lehane suggested that, “millennials are incredibly values-oriented and mission-driven. They value authenticity over material gains. More than 80% of millennials globally believe that a company should be evaluated by whether or not it is good for society”. The fact that, over the next 10 years, millennials will make up 50% of all voters and 75% of consumers gave him confidence about the future. Sharan Burrow was also optimistic because there is strong support for unions among young people, but she reminded the audience that recent research actually showed that millennials were not convinced that democratic systems work. Research conducted at Harvard indicated that fewer than 30% of U.S. millennials believe it is essential to live in a country that is governed democratically.

Finally, in response to a question from the audience, the panel discussed the fact that the gender divide is increasing, as is violence against women. Salil Shetty emphasised that this happens because, if men are not confronted with repercussions for their actions, they can act with impunity. Amnesty International is working with the police all over the world to ensure that they have the understanding and a change of mindset that leads to action when women have the courage to report incidences of violence, often domestic; for the moment far too many are neither reported nor acted upon.

Chris Lehane responded that digital platforms cannot sit back and allow discrimination or violence in their spaces to mirror what happens in society. Airbnb wants to work in partnership with government and other stakeholders in these areas. Airbnb is providing significant economic development opportunities for women, with 55% of the people who rent out properties through the site being female, and is also undertaking specific empowerment projects with women in India and Africa. Closing the session, Michel Landel referred to the programmes that Sodexo is involved in India and South America, helping to ensure that education and economic independence through employment and entrepreneurship is a route to empower women, and address the root causes of gender-based violence.

Watch the video session “Bridging Divides” at the OECD Forum 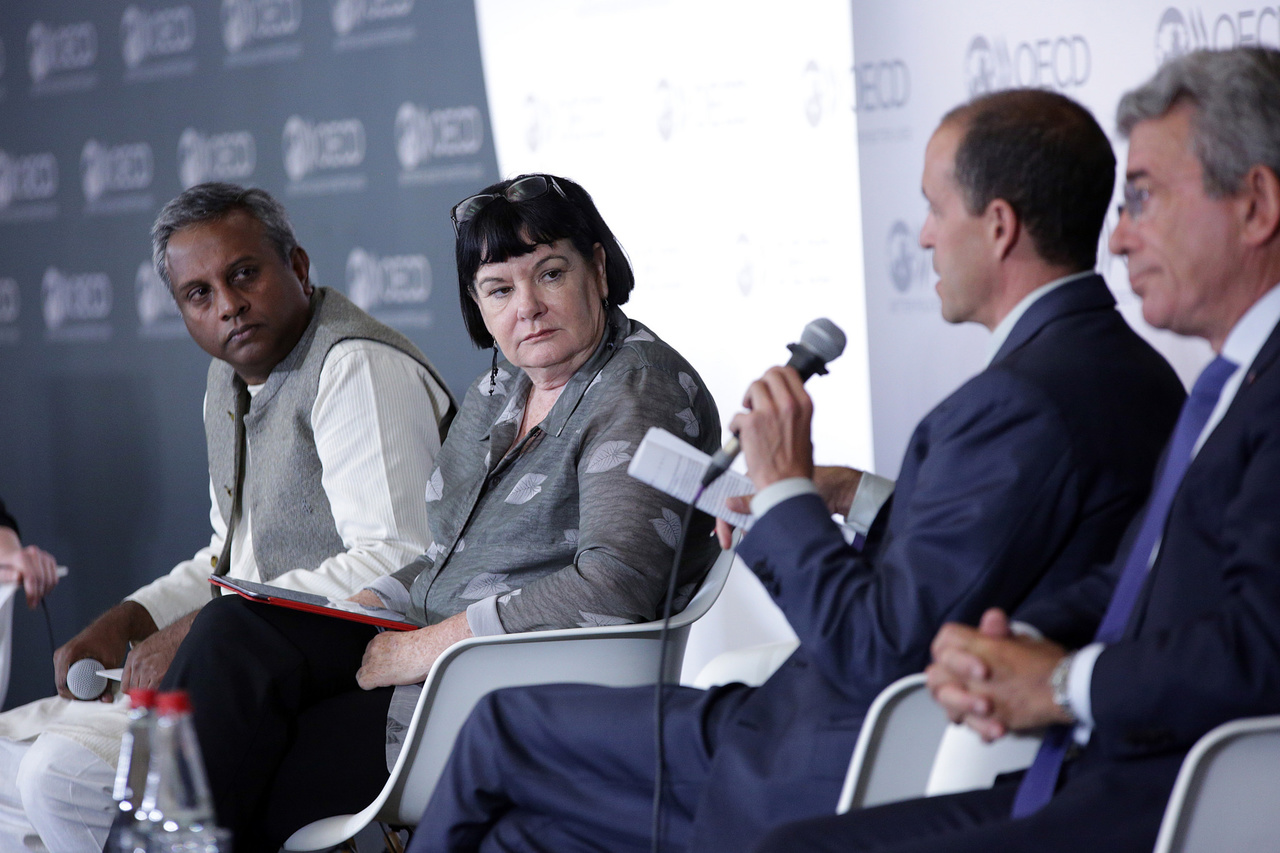