Divides between wealthy metropoles and lagging or declining regions have been blamed in many countries for polarisation in politics and in particular a lurch to the far right. OECD member countries are not the only ones to have an urban-rural divide. Take China, where income inequality has surged in recent years, with income per capita being three times higher in urban than in rural areas in 2012. One explanation for this large gap is China’s hukou system, which restricts the mobility of workers living in poor rural areas to move to more productive urban regions.

Surveys indicated that people from Nordic countries, led by Denmark, do not feel the need to exert caution when dealing with other people. To judge by the countries in the chart, a relatively high percentage of people living in Denmark, Finland, the Netherlands, Norway, Sweden and Switzerland are willing to trust other people, whereas in Argentina, Brazil, Chile and Colombia people reported feeling more apprehensive and cautious about relating to other people.

Trust in government may be at an all-time low, and this is reflected in in some regions. To judge by the countries in the chart, a relatively low percentage of people believe the governments of the Netherlands, Australia and New Zealand are corrupt, compared with Japan, Mexico, Slovenia and the US for instance. In a few cases, this perception worsens among people living in states and sub-regions, such as Zacatecas and West Virginia. 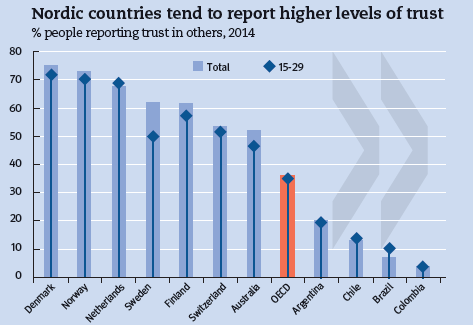